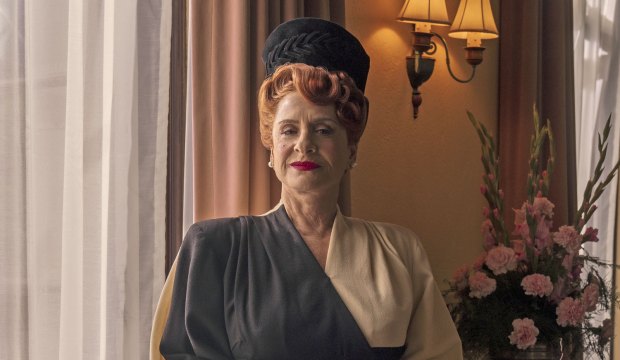 Legendary musical theater actress Patti LuPone co-stars in Ryan Murphy‘s “Hollywood” as the wife of a movie mogul who unexpectedly finds herself running a studio after her husband has a medical emergency. It’s a brassy, defiant character with strong rooting factor, so it could win LuPone her first Emmy. And if it does, she’ll be three-quarters of the way to the EGOT grand slam. All she would need to complete the set is an Oscar.

Naturally, the stage star won her Tony first: she won Best Actress in a Musical in 1980 for playing the title role in Andrew Lloyd Webber‘s “Evita.” She won that ward again in 2008 for starring in a revival of “Gypsy.” And she won her Grammys a few months after that: Best Classical Album and Best Opera Recording in 2009 for “Weill: Rise and Fall of the City of Mahagonny.”

This isn’t the first time LuPone has been in the Emmy conversation, but she hasn’t won yet. She earned a 1996 nomination in daytime: Best Children’s Performer for “The Song Spinner.” And then she was up for a primetime award in 1998 for guest starring on “Frasier.” She might have come close to a nomination for her guest-starring role on “Penny Dreadful” — she got a 2016 Critics’ Choice nom for that — but the television academy didn’t take notice.

We think they’ll take notice now. Most of the Expert journalists we’ve polled say she will be nominated for Best Movie/Limited Supporting Actress, and two of them currently say she’ll win: Tim Gray (Variety) and Jazz Tangcay (Variety). And this wouldn’t be the first time a veteran actress has won this award for a showcase role in a Ryan Murphy project: Jessica Lange won for the first season of “American Horror Story,” and Kathy Bates won it a couple of years later for “American Horror Story: Coven.”

LuPone’s role in this revisionist history of show business could especially resonate with female voters who can still relate to her struggles to earn respect and validation in a sexist business. Though even if she does win the Emmy, wrapping up that EGOT is easier said than done. An Oscar is arguably the hardest prize to get since there are so few available categories compared to the Emmys and Grammys, and finding just the right project at just the right time that strikes a chord with the motion picture academy comes down to a lot of campaigning and a lot of luck. But maybe Ryan Murphy could write her a movie too.