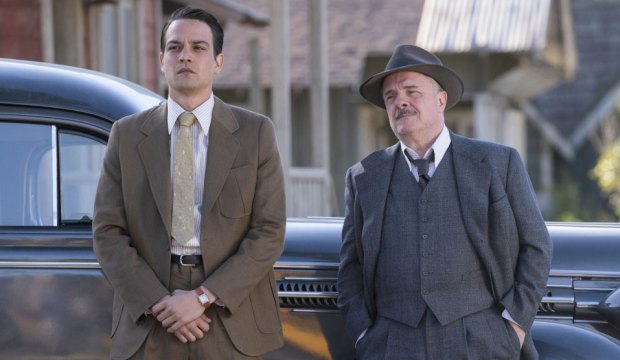 The Showtime series “Penny Dreadful: City of Angels” premiered on April 26, 2020. While technically a spin-off of the original “Penny Dreadful” series, “City of Angels” is more of a spiritual successor than direct continuation of the original’s story. The series examines racial divisions of the past as supernatural deities loom over the proceedings. Explore exclusive video interviews with top Emmy contenders from the show below.

“City of Angels” takes place in 1938 Los Angeles. Rookie detective Tiago Vega (Daniel Zovatto) is the first Chicano member of the LAPD. Lewis Michener (Nathan Lane) is a veteran officer who takes Tiago under his wing when no other detective will take him on as a partner. The pair investigate the grizzly murder of a wealthy white family, and signs point to a Mexican gang as the murderers. Stoking the fires of racial discord is Magda (Natalie Dormer), a shapeshifting demon who is out to prove to her sister Santa Muerte (Lorenza Izzo), the holy angel of death, that humans are inherently evil. As Magda assumes the forms of various figures to provoke the downfall of mankind, the series asks viewers to examine if the biggest monsters are the ones that reside in men’s hearts.

The series is created by John Logan (“Gladiator,” “The Aviator”), who has a Tony win, three Oscar nominations, and an Emmy nomination for writing the TV movie “RKO 281.” Logan’s original “Penny Dreadful” racked up thirteen Emmy nominations across its three season run. The nominations were all in Creative Arts fields such as makeup, production design, hairstyling, special visual effects, and music composition. “City of Angels” could contend in those same categories thanks to its stunning recreation of 1938 Los Angeles.

Too much time with boogeymen like Frankenstein’s monster could have scared voters away from the mother series when it came to the main Emmy categories. However, the grounded and character-driven focus of “City of Angels” could help the show overcome any genre bias. Watching Natalie Dormer adopt wildly distinct personas or seeing Tony winner Nathan Lane grapple with a secret Nazi threat may be catnip to Emmy voters. And in addition to the previously mentioned stars, the cast also includes Oscar nominee Adriana Barraza, BAFTA nominee Rory Kinnear, Emmy winner Brad Garrett, and a captivating turn from Kerry Bishe.

Check out the links below to see what the cast and creative team had to say about the new series.