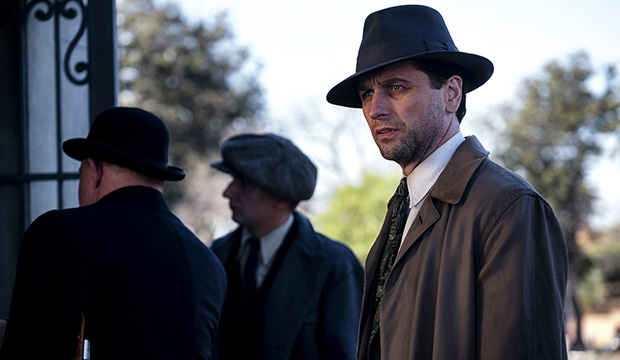 The Golden Globe drama series race is shaping up to be a battle between Season 4 of Netflix’s “The Crown,” which premieres Nov. 15, and HBO’s “Perry Mason,” according to the latest predictions of Gold Derby’s Experts. The reinvention of the classic Raymond Burr crime drama traces Mason’s early sketchy years as a L.A.-based private investigator before he was persuaded to try his hand at the law. The noirish mystery, set in 1932, stars Emmy winner Matthew Rhys with valiant and vibrant support from John Lithgow, Juliet Rylance and Shea Wigham. Rhys is a two-time Golden Globe nominee for his performance as a conflicted Russian spy in FX’s long-running series “The Americans.” Lithgow is a five-time Golden Globe nominee, most recently for his Emmy-winning turn as Winston Churchill in “The Crown,” and a two-time winner for his performances in NBC’s “3rd Rock from the Sun” and Showtime’s “Dexter.” The original “Mason” (1957-1966) won a Golden Globe in 1961 for “television achievement” and two Emmys for lead actor Burr and one for supporting actress Barbara Hale as Mason’s circumspect assistant Della Street.

PREDICTMake your predictions: Will ‘Perry Mason’ return to the Golden Globes

Gold Derby experts currently give “Perry Mason” 39/10 odds, with four predicting a nomination and one a win. That puts the show — which has been renewed for a second season — in second place behind “The Crown,” which hasn’t won Best Drama Series since 2017, when the show also took home the Best Actress drama crown for Claire Foy as Queen Elizabeth II. Among the category’s top-five projected nominees, which also include “Ozark,” “Lovecraft Country” and “The Mandalorian,” recipient of several craft Emmys this year, “Mason” is one of three new series among top contenders. That’s always appealing to Globe voters who like to think they’re ahead of the curve. Its story line — a deep dive into the Erle Stanley Gardner character’s past — was a bold move that paid off for executive producers Rolin Jones, Ron Fitzgerald and Robert Downey Jr. (who was originally slated to play Mason).

The character of Perry Mason has resonated with audiences for decades. Besides the original CBS series, a revival, “The New Perry Mason,” which starred Monte Markham, was mounted in 1973, but went bye-bye after 15 episodes. In 1985, Burr resurrected the criminal-defense lawyer for a series of 30 TV movies that aired over a 10-year period.

Whatever “Perry’s” fate at next year’s Golden Globes, it seems that Welsh actor Rhys will be named Best Actor in a Drama Series for his portrayal of the deeply flawed character, seen as a divorced and traumatized World War I veteran. Among projected nominees, he is currently in first place with 16/5 odds. Three out of four experts pick him to win over his nearest competitors, Jason Bateman, a two-time Golden Globe nominee for “Ozark” and a 2005 winner for “Arrested Development,” and Tobias Menzies of “The Crown.” They are tied for second place with 4/1 odds. They are tied for second place with 4/1 odds.