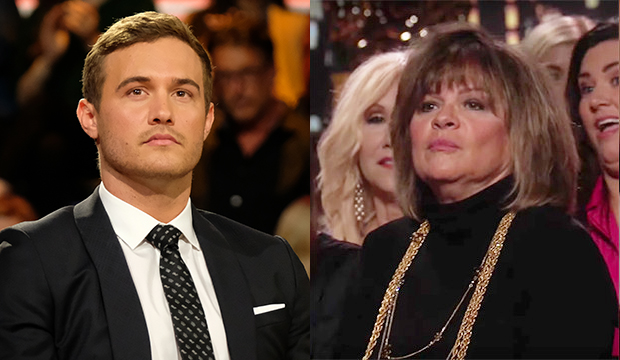 It feels like 497 years ago, but it was only last month that Barbara Weber became a Bachelor Nation legend with her DGAF disapproval of her son Peter Weber‘s rekindled romance with Madison Prewett on “The Bachelor: After the Final Rose.” But Weber has no ill will towards his mother for tearing him down on national TV.

“That was tough. Listen, my family in general, they’re my rock. I’ll defend them ’til the day I die. I love them more than anything,” Weber said on Nick Viall‘s “The Viall Files” podcast. “They truly just want the best for me. In regards to what occurred on stage … could [my mom’s] delivery been different? 100 percent. But where that was coming from was a place of pure love. That’s who my mom is.”

During the live episode, Barb, who desperately wanted Weber to be with his initial pick Hannah Ann Sluss, shot death glares at the couple, called out Prewett for making the family wait for three hours when they met and then not being warm, asked her husband in Spanish to back her up, and announced that “everyone knows it’s not going to work” and that her son has to “fail to succeed.” It was so tense that Chris Harrison said the next day that Weber was “visibly upset” afterward and he “fully expected to see him on my porch last night.”

“I respect the hell out of my mom,” Weber added. “To be able to speak her mind and not feel the pressure to cave in to a certain narrative on live-television, in front of millions of people… that takes a strong person. That’s the love of a mother.”

However upset Weber, who lives with his parents, was, it was short-lived, just like his relationship with Prewett, which ended two days after the finale. The pilot explained that after he and Prewett decided to get back together in February, they didn’t see each other again until “After the Final Rose.” “Looking back on it, I feel like we should’ve tried to see each other before we showed up on stage together,” he said.

After the taping, they “weren’t in the right headspace” to do the usual post-finale press tour and spent the next two days talking to each other. “She went to her hotel to talk to her family for a bit, then she came over to my hotel,” he shared. “That was mainly just [us] trying to be there for each other. [Thursday, two days after ‘After the Finale Rose’] was when we pretty much spent the entire day together. That was, ‘OK, let’s figure this out.’ I remember going to her hotel… it was super sad. For probably six hours, we stayed on her bed there, we laughed, we cried, we hugged each other… it was rough.”

The pair announced their split in dual Instagram posts that evening.