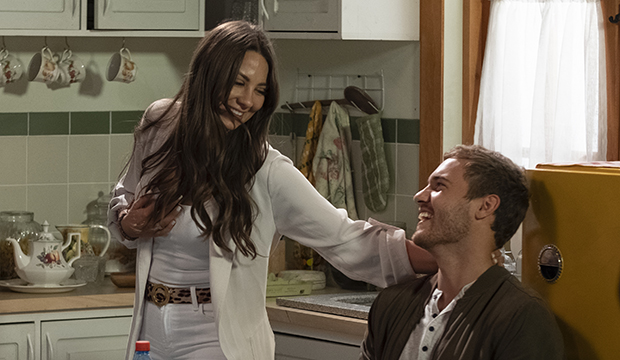 Are they or aren’t they? That’s the question Bachelor Nation has had since Peter Weber and Kelley Flanagan got flirty outdoors two weeks ago in the middle of a pandemic and then brought their flirting indoors for endless TikToks. And while you might think it’s the former, Weber says they are actually not dating (for now).

“Are we dating? No. Do I love spending time with her? Absolutely,” the former Bachelor said on fellow Bachelor Nick Viall‘s podcast “The Viall Files,” released Tuesday, addressing those dating rumors for the first time. “Could I see that in the future? Yeah, of course. I’d be extremely lucky and very happy if that happened.”

Weber added that he’s “the last person that needs to rush into any kind of relationship. So give him points for self-awareness. “I just had an engagement that didn’t work out. I just was trying to pursue things with another woman that didn’t work out,” he said, referring to Hannah Ann Sluss and Madison Prewett, respectively. “That’s why right now, I’m just taking it really, really slow.”

But, uh, Pelley? Keter? What are we going with here? Anyway, they could be MFEO. The pilot noted how “serendipitous” their relationship has been since they randomly met at a hotel shortly before production on “The Bachelor” began. That connection gave the lawyer a leg up all the way until the final five when Weber eliminated her and went on to get engaged to Sluss, only to break up with her for Prewett, against his mother Barbara‘s wishes, and only for them to break up two days after the finale.

Since filming wrapped in November, Weber has had two more chance run-ins with Flanagan: the night before the Super Bowl in February, and “a couple weeks ago” when their fellow Bachelor Nation alum Kristian Haggerty brought Flanagan along after Weber asked her to hang out with him, Dylan Barbour and Devin Harris. “They show up, I see Kelley again… jaw drops,” Weber recalled. “We chat, we end up hanging out and that’s when I got her number. We started to communicate and just stay in touch.”

Shortly afterward, Weber, who is not working at the moment, flew from Los Angeles, where he had been quarantined at his parents’ house, to Flanagan’s hometown of Chicago to quarantine at her apartment with his “Bachelorette” co-star Dustin Kendrick, who looked like he was third-wheeling their outdoor “date.”

SEE ‘The Bachelor’s’ Chris Harrison is all for a Peter Weber-Kelley Flanagan romance (if they are, indeed, dating)

“It kind of just became a thing where we’ve always gotten along really well, and had really good chemistry,” Weber said. “We just enjoy each other’s company. I just decided to quarantine up here with Dustin as well.”

Meanwhile, Kendrick, like Chris Harrison, supports a Peter-Kelley coupling. “I think Kelley and Peter get along great,” he told “Us Weekly.” “I would love to see something come out of this but timing just isn’t the best for them. … They just get each other and their chemistry is disgusting cute! Coming from the third wheel guy of the year.”

You know who else is most definitely ‘shipping them? Barb. She’s already told Flanagan that she is her “fave.” Live shot of Barb*:

*when the pandemic is over