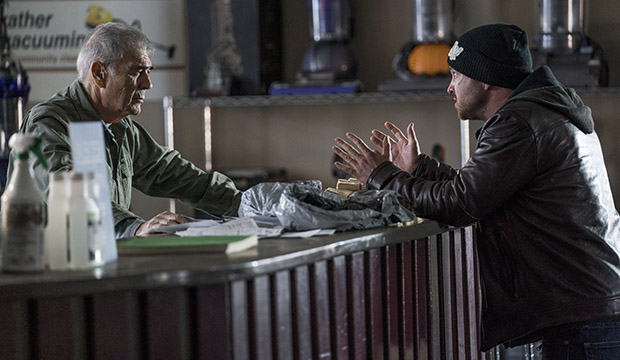 “El Camino: A Breaking Bad Movie” debuted in October to a warm reception from critics and die-hard fans alike, who had longed to see what happened to Jesse (Aaron Paul) for the past six years. But the Netflix film, written and directed by series creator Vince Gilligan, has underwhelmed on the awards circuit so far, getting snubbed completely by the Golden Globes and Screen Actors Guild Awards. However, it may finally get its day in the sun at the Producers Guild of America Awards.

At the moment, the film is the odds-on favorite to snag the Best TV Movie prize. This is just the second year of the category’s existence, as PGA split its old long-form TV category into Best Limited Series and Best TV Movie last year, resulting in a surprise win for “Fahrenheit 451” in the latter.

Working in “El Camino’s” favor is that it’s an extension of one of the biggest dramas of all time and it’s in a not particularly loaded field. In second place is the “Black Mirror” episode “Striking Vipers,” followed by “Deadwood: The Movie,” “American Son” and “Apollo: Missions to the Moon.” The fourth season of “Black Mirror” won the final long-form TV award two years ago. Plus, we know PGA likes “Breaking Bad,” as the show garnered back-to-back Best Drama Series trophies for both parts of its fifth and final season — it’s one of only four shows with multiple wins in that category — so “El Camino” would mark the third PGA victory in the “Breaking Bad” franchise.

While “El Camino” was overlooked by the Globes and SAG, it received two Critics’ Choice Awards nomination — Best TV Movie and Best Limited Series/TV Movie Supporting Actor for Jesse Plemons — though Paul was surprisingly snubbed in the lead actor race. It’s also hit the other major guilds, the Writers Guild and Directors Guild of America Awards, for Gilligan.

Be sure to make your PGA Awards winner predictions today so that Hollywood insiders can see how their films and TV shows  are faring in our odds. You can keep changing your predictions as often as you like until just before winners are announced on January 19. And join in the fun debate over the 2020 PGA Awards taking place right now with Hollywood insiders in our forums. Read more Gold Derby entertainment news.