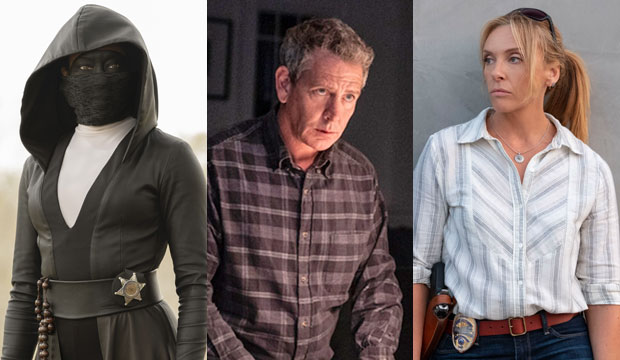 Award shows hardly seem like the most important front in the battle to protect Black lives from police brutality, but the media plays a big part in setting the terms of our cultural debate, and while not everyone agrees on whether we should defund or abolish the police, we may be at a point where we no longer assume that police are the heroes of our stories. So will that affect the Emmys, where the TV industry decides which stories it values?

Police stories have inherent dramatic tension: murders, mysteries, good guys tracking down bad guys. So it’s no wonder that they’ve been all over the Emmys too, from “Dragnet” in the 1950s to “Police Story” in the 1970s, “Hill Street Blues” and “Cagney and Lacey” in the 1980s, and “NYPD Blue” and “Law and Order” in the 1990s. All those shows won Best Drama Series, and though 21st century champs “24” and “Homeland” weren’t about police officers, per se, those counter-terrorism shows continued the tradition of crusading crime fighters.

Now police procedurals are all over the airwaves, including the now-21-year-old “Law and Order: Special Victims Unit” and “Chicago PD” on NBC, “The Rookie” on ABC, and a hefty chunk of CBS’s primetime lineup. But journalists are starting to wonder if we’ve centered the stories of police too much in our culture and if maybe we should stop doing that. Perhaps in focusing so much on the valor of the profession, the media has contributed to a culture of impunity that led to the killings of Breonna Taylor and George Floyd as well as the widespread and well-documented brutality against citizens protesting those killings.

“Live PD” and the long-running “Cops” have both already been cancelled as a result of this rapid cultural shift. Some critics and audiences are even questioning whether the lighthearted and critically acclaimed (and Emmy-nominated) “Brooklyn Nine-Nine,” about lovable NYPD officers, still has a place on the airwaves after we’ve seen video footage of NYPD vehicles literally driving into protestors.

SEELaw and order candidate: Toni Collette (‘Unbelievable’) may follow in the Emmy footsteps of Cagney and Lacey and Benson

This feels to me like an inflection point in our cultural relationship with the police. I’m not sure defunding or abolition are on the immediate horizon all across the country (though Minneapolis, where George Floyd was killed, might already be on its way), but this moment of reflection for the media could shape how we view the police and their role in our society in the long-run.

And to be fair, some media has already been moving in that direction. We’ve come along way from the unambiguous heroism of “Dragnet” to the character nuances of “Hill Street Blues” and “NYPD Blue,” to a show like “The Wire” in the 2000s that examined deeply entrenched institutional corruption, plus “The Shield” where the police were the criminals. So while cops are probably more prevalent on TV than ever before, the classic cop show formula hasn’t really shown up as often at the Emmys in recent years.

The shows about law enforcement that do get Emmy attention these days tend to be more critical of the justice system: consider “The Night Of,” “Orange is the New Black,” “American Crime,” “American Crime Story” and “When They See Us,” which have explored in different ways how minority groups are often unfairly treated by that system. Still, shows about police work are bound to resonate differently this year, whether it’s detectives hunting down an otherworldly killer in “The Outsider” or, yes, the precinct office comedy of “Brooklyn Nine-Nine.”

Two other major Emmy contenders ask us to empathize with police, but both tackle police work with a critical eye. The hero of “Watchmen” is a masked cop played by Regina King, but that show also deals with how race intersects with and clashes with justice — one important police character is even revealed to be secretly a member of the Ku Klux Klan.

The heroes of “Unbelievable” are also women, the detectives (played by Merritt Wever and Toni Collette) who track down a serial rapist, but that show also addresses how bad policing can be just as traumatic as the crimes they’re supposed to be solving — namely the detectives who wreck a young woman’s life after wrongly concluding that she’s lying about her sexual assault.

Nevertheless, the protagonists on those shows are still police, so how do they contribute to our understanding of the culture of policing? And how will they be greeted by the industry professionals who vote for the Emmys as we grapple with how Hollywood depictions of policing affect the power and influence we’ve given police in the real world?