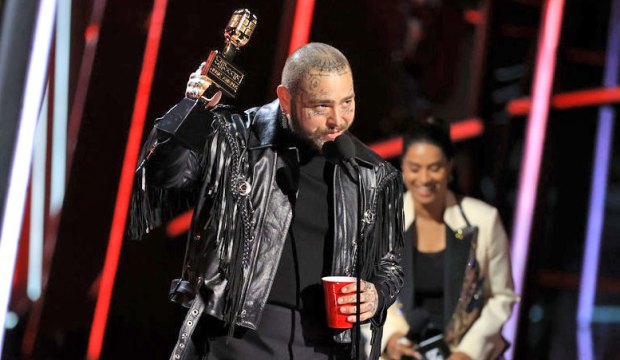 Post Malone was the big winner at the 2020 Billboard Music Awards. He claimed Top Artist and Top Male Artist during the live broadcast on October 14, and then host Kelly Clarkson wheeled out a cart with more trophies, revealing that Post Malone had won a total of nine out of his 16 nominations. Check out the complete list of winners here.

These awards were delayed from the spring due to the coronavirus pandemic, and they honored chart achievements from March 2019 to March 2020. Winners were determined the same way Billboard determines its weekly charts: by calculating record sales, online streams, radio airplay, touring performance and social engagement. And Post Malone won for the year he topped the charts with his album “Hollywood’s Bleeding” and its single “Circles,” which was a fixture on the Hot 100 even after the BBMAs eligibility period, setting a new record as the longest-running top-10 hit of all time.

Billie Eilish was also a winner on Wednesday night. She claimed awards for Top Female Artist and Top Billboard 200 Album for her Grammy winner “When We All Fall Asleep, Where Do We Go?” She was also announced as the winner of Top New Artist after the event. A couple more breakthrough artists from 2019 also collected hardware: Lizzo won Top Song Sales Artist and Lil Nas X, unsurprisingly, won Top Hot 100 Song for “Old Town Road,” which became the biggest number-one hit of all time with 19 weeks on top.