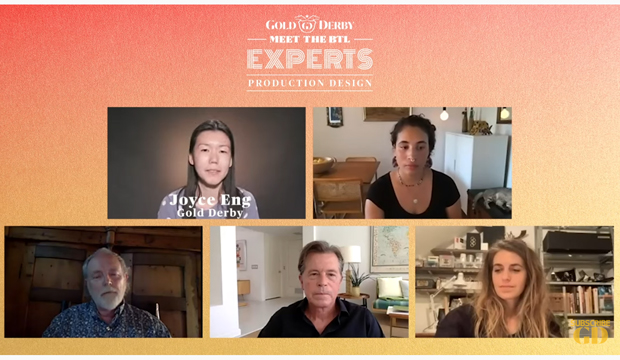 Production designers build immersive worlds for audiences to vicariously live in, but the fulfilling part of the job may be before any sketches or models.

“What I hope in my design is I get to learn something every time,” “Westworld’s” Howard Cummings said on Gold Derby’s Meet the BTL Experts: Production Design panel (watch above). “When you do the research, certainly that is really fun because I know so much random stuff — I know how fishermen store fish and things like that or unfortunately things like mortuaries and prisons. You don’t get jobs like that in the real world that you’re just constantly learning. For me, the thing I love the most about it is the learning of it all.”

“Couples Therapy’s” Nora Mendis concurs: “I just love doing all the research and building the world from scratch. It’s just fun. You just have so much impact on the way you experience the world and objects and space. I always joke that the best movie would not have any actors in them; it’d be just a bunch of rooms! That’s all I remember looking at. It’s just fun to see how it is a costume but an office.”

Misty Buckley (“The Little Mermaid Live!”), who has a background in concert sets, has a slightly different entry point. Having designed stages for Coldplay and U2, among others, she loves finding a way to help bring artists’ songs to life. “I think it’s how people feel. It’s making people feel a certain that for me is what gives me the buzz in production design and being able to create that space and that environment and hopefully give the audience that will make them feel some things as well,” she shared.

Overall, their job is one that “Godfather of Harlem’s” Dan Leigh likens to that of a painter with a blank canvas. “There’s this palette of color, which is put on a canvas and arranged and mixed in a certain way to create something that’s never existed before that has content,” he said. “I sort of feel like objects … and textures to create an environment, we can rearrange the real world to infuse a film frame with something which supports what the actor is doing.”

We also had individual conversations with each of these production designers. Click on each name below to be taken to those 10-minute chats: