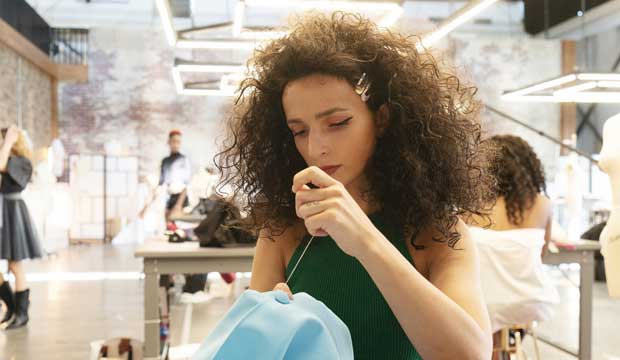 This January 16 episode of “Bravo’s “Project Runway” was a treasure trove of testy remarks, bon mots and bitchy banter.  After six episodes, it’s natural that the remaining designers are starting to get on each other’s nerves. The challenge required the contestants to sew a look that reflected their heritage. They were given a tablet for research and, lo and behold, they got to speak with a family member to help them come up with a look.

Take Devlin McCray, who managed to be on the bottom for the first time after he was frustrated about how to portray his background. Meanwhile, his mom takes a look at him from his tablet and says “Looks like you need a haircut.” Come on lady, your son needs your input. Then there was Geoffrey Mac, who at least had immunity. His mother couldn’t hear him say, “I just won the Cyndi Lauper challenge.” Her grouchy response? “Terrible connection.” Needless to say, she was no help

Then you got to love Victoria Cocieru, who besides never getting anything but praise for her ensembles on the show, makes the most of her Moldovan accent when she is asked in the workroom who she thinks is her main competition. She quickly replies, “Geoffrey, Brittany (Allen) and Devlin.” During her confessional, an off-camera voice then asks, “What about Sergio?” She doesn’t hesitate: “Nooo! Of course not!”

Designer Sergio Guadarrama and his over-sized ego had yet another in a series of awkward moments with mentor Christian Siriano, this time basically telling him to buzz off. Christian: “Any interest in showing me what you’re working on?” Sergio: Um … I’m good.” Karma is a killer as he lands in the bottom two weeks in a row.

Brittany got ticked off when Sergio ordered models to help him stitch the names of six Mexican children who died near the border — making his design deemed more political than personal. Her observation? “The is a fashion competition, and the way the models are helping him really — it’s putting me off a little bit.” She also fumed over how obsessed the judges are  about Victoria’s output.

SEE‘Project Runway’ recap: The designers got personal and political in ‘There is Only One You,’ but one wasn’t up to snuff

Then there was guest judge Fernando Garcia letting it be known that he attended Notre Dame when he critique Chelsey Carter‘s winning varsity jacket look: “I love anything collegiate.” Take the poll below and pick your favorite quote from this entertaining episode — and let’s hope Sergio and his mood swings continue to hang around a while longer.