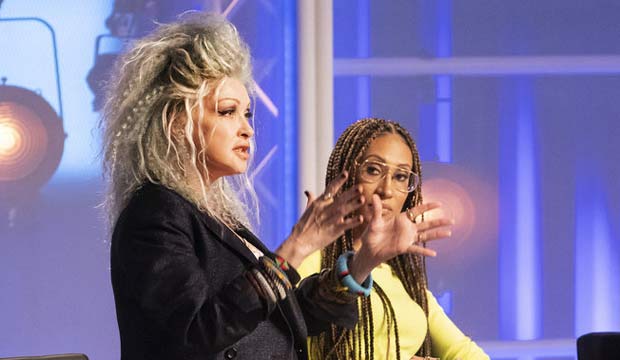 “Project Runway” mentor and Season 4 winner Christian Siriano was quite happy with many of the ’80s punk-inspired designs in honor one of the decade’s musical icons Cyndi Lauper, who was quite invested in her role as a guest judge on Season 18’s fifth episode titled, “Sew ’80s.”

But he was not so gleeful over the outfit by eliminated designer Melanie Trygg, whose minimalist aesthetic clashed with the over-the-topness of punk fashion. “It was a bad combo. Just like Bruce Willis and Demi Moore — all sad.”

Of course, he gets Cyndi herself to sit down and chat during a new addition to the Bravo reality experience — the “Project Runway After Show” (watch video below). The “She-Bop” singer sits down and immediately tells a joke: “A horse walks into a bar. The bartender says, “Hey!” The horse says, ‘Buddy, you read my mind.” Christian also shares a groaner: “Two peanuts walk down the street. One was assaulted.” Adds Cyndi, “These are jokes you can tell your kids.” Adds Christian, “Forever.” Adds Cyndi, “And they’ll hate you.”

He tells Cyndi that he learned a lot from her. She says: “I studied this stuff. When I went to a fashion industries high school, I was told by my sewing teacher I made torpedos, not knots.  So I started doing deconstruction and seam on the outside. As I was coming up, I wore that all the time and I loved it. It was the whole idea from the beginning, what I was doing.” Adds Christian, “You were inspiring so many people.” Cyndi responds: “It was anti-fashion in a way, because it was time for fashion to be turned on its head.”

She continues on, saying she worked at the New York vintage store “Screaming Mimis” in 1981. “I didn’t think they would hire me. I shopped there.  I really do love fashion. I just wanted so bad to sing, then I would be sewing before sound check and after a while they said you can’t have it anymore. ‘You’re late, pick a job.’ “

He then asks, “How did you like judging this challenge? Did you think some of the work was amazing?” “It was good,” she says, but adds, “but some of it was like, ‘Don’t wear that.’ ” I thought the guy who was confusing the ‘Beetlejuice’ (meaning Sergio Guadarrama), not sure what that was.” Christian concurs

Christian notes that Geoffrey Mac‘s winning look was cool. Lauper growls, “Geoffrey. I was glad he won.” She suggests anyone could wear his all-black look. The singer then says, “I was very sick awhile ago, psoriaosis from head to toe. When I looked at Geoffrey’s thing, it does hide everything so in my case, if I was flaring on the arms, you still look stylish. You don’t look like you’re Mother Cabrini (Suggestion: Google it). And it’s shiny, too.” Turns out, Cyndi was the tie-breaker among the judges and stood by her super fan Geoffrey while Victoria Cocieru had to settle for No. 2.

Christian asks Cyndi if she knew Geoffrey used to do drag of her. He then shows her some photographic evidence: “Look at that.” She doesn’t think he captured her all that well but agrees that dressing that way empowered him. And she’s all for that.