After mentor Christian Siriano decided to use his first ever “save” on eliminated designer Brittany Allen, he had no one to interrogate and complain about the green stuff in his cocktail on his weekly after-show segment. He says he couldn’t let someone who was so talented leave the show after her first attempt at doing menswear for the re-invented tuxedo challenge. But by doing so he sabotaged his new after show.

Luckily, Season 17 winner Sebastian Grey stopped by on episode 9 to provide a carb-heavy Colombian breakfast for the seven remaining contestants as well as a pep talk. Sebastian says returning to the show felt like ” a good flashback.” He adds: It’s good because like you miss it, but you’re happy that your’f not there anymore.”

Christian responds, “Fan fact. We’ve never been eliminated.” Sebastian adds, “You know, I never knew what it was to be even in the bottom.” Christian: “I feel ya.” But then he must admit, “I was in the bottom once, maybe.” A flashback image to Season 4 confirms it. Sebastian asks how did it feel and a cheeky Christian has just the right comeback: “Please, they were wrong.”

The mentor explains that his decision to use his super power came to him in the moment when he was prepared to say goodbye to the Texas gal who loves to swear. Christian adds that he sees things that the judges don’t as he watches the designers in action in the workroom. Sebastian also pays him a compliment: “Sometimes you give the best advice.”

Christian asks what Sebastian thinks of the Season 18 designers. He responds that “the designers are really, really talented BUT the dress of Sergio (Guadarrama) — I was a little disappointed seeing that.” Christian adds: “He’s not interested in my opinions, which is fine but I liked it.”  Sebastian says he “loved it,” too, but was disappointed that it so clearly referenced the backwards John Galliano tux that Celine Dion wore to the Academy Awards in 1999.

Sebastian then asks who would Christian have saved in his season. Replies Christian, “God, I didn’t even like anybody,” which causes Sebastian to cackle. “You know who I would save? I would say Renee (Hill). I think Renee went home too early.” The two winners finally toast with their beverages. As usual, the after-show host has gripes about his drink: “Is that a rum and Coke? What are we, 18?”

SEE‘Project Runway’ recap: ‘Suit Yourself’ reinvented the tuxedo with help from some old friends [LIVE BLOG]

Well, for the second time on his after show, Christian wants to play a game and put Sebastian in the hot seat with a drawing board. “The game is you’re back in the competition and your challenge starts right now. You have to sketch RIGHT NOW. Animal prints street style.” I won’t spoil won’t Sebastian comes up with, but just let me say what he calls his style of pants made me laugh out loud. Christian also tells him to make a jumpsuit  or a cocktail dress in space travel. Somehow the game ends with a Britney Spears challenge since Sebastian learned English by listening to her songs.

But the best part of the after show is when Mood mascot Swatch, whose appearances at the fabric store are rather few and far between of late, gets to schmooze with Christian. The Boston Terrier, who sports a cute red bow tie for the occasion, is not much for talking but his sad eyes say it all. It is clear he is simply putting up with his host as he lays down and then gives a little shake. He is asked, “Who do you think is the underdog in this competition?” If Swatch has an opinion, he isn’t sharing. At least, not without food involved. Sure enough, there are treats in front of pictures of the remaining designers. You will just have to wait to see which one he picks as the eventual winner.

Designers who quit ‘Project Runway’: Who left the show and why? 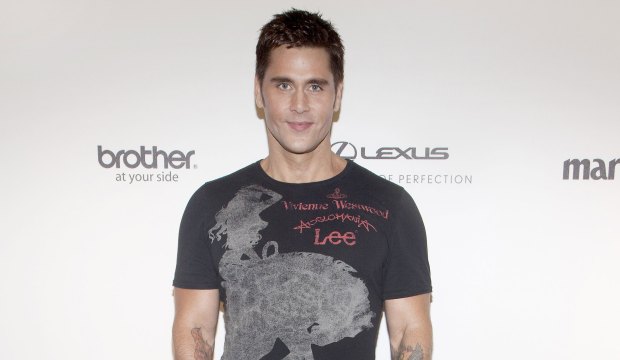