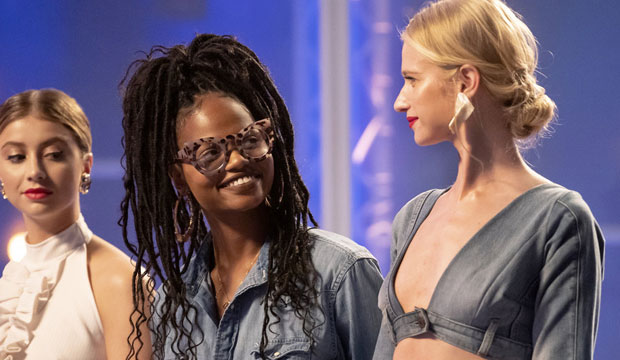 Who will win season 18 of “Project Runway”? The fans we’ve polled have been split between Brittany Allen, Victoria Cocieru and Delvin McCray in recent weeks. But one name who hasn’t risen to the top of our odds yet this season is one we might be underestimating: Chelsey Carter. After seven weeks of competition, she holds the distinction of never having landed in the bottom three. That makes her the only designer without a negative critique from the judges.

It took her a while to hear anything from the judges, though. She was safe through the first three challenges, stuck in the middle of the pack without a high score or a low score from panelists Karlie Kloss, Nina Garcia, Brandon Maxwell, Elaine Welteroth and various guest judges. She was concerned about advancing through the competition without any judges’ feedback to guide her onto the right path, but the first time she was singled out, it was good news.

In episode four, “The Ultimate Upcycle,” she turned jeans from Goodwill into a head-to-toe denim look for Kloss to wear to a fashion industry event in Paris. Cocieru ended up winning that challenge, but Carter made it back to the top two weeks later in “There is Only One You,” when she made a letter-jacket dress in honor of her family of educators and to acknowledge the often limited educational opportunities for African-Americans. That time she won.

Other designers have gotten more high scores than Carter has, but she’s the only one who has escaped the bottom every single time — so far. And that could be the key to making it to the finale. Having a few great looks is all well and good, but the judges will likely want to see a full collection from her if she never gives them a reason to doubt her. Despite her perfect record, though, she trails in fifth place with 16/1 odds of winning, according to the combined predictions of “Runway” fans who give us their forecasts ever week. Is she a bigger threat than we’re giving her credit for?