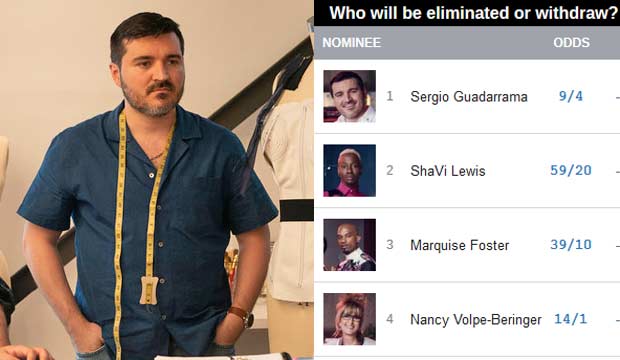 Our readers thought Sergio Guadarrama might be a goner in “Sew 80’s,” the week-five challenge of “Project Runway,” and I thought that was just wishful thinking, but he did in fact get his first ever low score from the judges. And he didn’t take it well — at all. So will he spiral out of the competition entirely in week six?

Yes, according to the combined predictions of “Runway” fans who give us their forecasts every week here in our predictions center. He gets leading odds of 9/4 to be sent packing. But it started so well for him. He showed signs of arrogance from the very first challenge, “Blast Off,” proclaiming that he was already at the same level as judge Brandon Maxwell and mentor Christian Siriano. But he got a high score in that challenge, and then he managed to win the unconventional materials challenge in “Sleigh the Runway” by turning wrapping paper and a basket into a cocktail dress.

He thought he was too skilled to ever land at the bottom, but those early successes might have gone to his head. “Sew 80’s” was a team challenge to create Cyndi Lauper-inspired collections and he took it upon himself to lead his teammates. Their collaboration was so harmonious that none of them seemed to notice how bland their collection was, and they lost the challenge, with Guadarrama’s look singled out as one of the weirdest, least focused, and least appealing on the runway, though luckily for him Melanie Trygg was eliminated instead.

Tonight’s show will give the designers freedom to create whatever they want inspired by their own backgrounds, but the preview for tonight’s show at the end of last week’s episode was concerning, showing Guadarrama refusing to show his work in progress to Siriano and then crying on the runway. But those previews are often deceptive, and there was a lot of crying in that preview.

Do you think this will really be Guadarrama’s last stand? If so, how will he insult the judges’ taste this time?