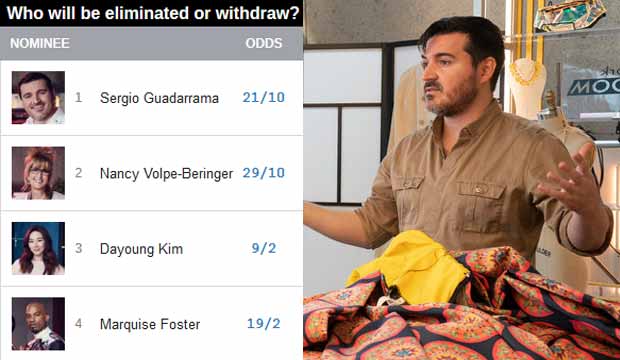 For the third week in a row we’re predicting elimination for “Project Runway” designer Sergio Guadarrama. But is that just wishful thinking? Our odds are based on the combined predictions of “Runway” fans who give us their forecasts every week here in our predictions center, but fans have also let us know how little they like Guadarrama’s attitude. Are they just hope-dicting him to leave the competition? Maybe not.

As of this writing Guadarrama gets leading odds of 21/10 of being sent packing, and though we were wrong about him being ousted for the last two weeks, we weren’t far off. The judges thought he was one of the worst designers in “Sew 80’s,” leading his fellow designers astray in a team challenge, and he responded so poorly that he told the judges he didn’t care what they thought. Then he landed at the bottom again in “There is Only One You,” where he tried to make a political statement that got lost in translation.

Only one other designer remaining has been at the bottom twice, Marquise Foster, who recently rebounded into safety in the “Only One You” challenge. But both Foster and Guadarrama have also won a challenge before, so the judges may still be inclined to give them the benefit of the doubt if they land in the bottom with a designer who hasn’t won yet.

Perhaps that’s why Nancy Volpe-Beringer ranks second in our elimination predictions with 29/10 odds. She hasn’t gotten a single low score yet, but she has also only gotten one positive critique, in “The Ultimate Upcycle.” Having flown under the radar for so long, she might be easy for the judges to send home if she has a bad week. That’s what happened to Melanie Trygg, who coasted for weeks before the judges sent her packing in “Sew.”

Dayoung Kim is vulnerable for a similar reason and ranks third with 9/2 odds. Her only critiques from the judges thus far were a low score in the premiere episode, “Blast Off,” and then a triumphant runner-up finish in “Only One You.” So it seems like she’s on an upward trajectory, but she also hasn’t made much of an impression on the judges besides that one challenge.

What’s more, Kim experienced a health scare in “Cats of the Urban Jungle,” and it looks like she may experience another one based on Bravo’s preview for tonight’s show, in which it looked like she might get another visit from the paramedics. So it may not be up to the judges whether Kim stays or goes.