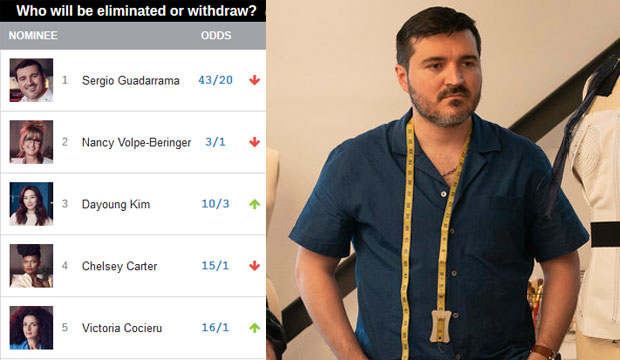 According to the combined predictions of “Project Runway” fans who have placed their bets here in our predictions center, Sergio Guadarrama and Nancy Volpe-Beringer are the most likely designers to be eliminated in episode eight. But what about Dayoung Kim? She has had great looks for two weeks in a row while continually struggling with her health. Will she have to withdraw?

Guadarrama gets leading odds of 43/20 as of this writing, but it’s the fourth week in a row that our readers have been predicting his ouster. He came close a couple of times, landing at the bottom of the judges’ scores in “Sew 80’s” and “There is Only One You,” but he rebounded with a safe score in “Project Runway X Ashley Longshore,” though he thought he deserved to win that challenge. The villainous edit he’s gotten on the show suggests a comeuppance is eventually on the way, and talking back to the judges in “Sew 80’s” certainly didn’t endear him to the panel, but will this be his time?

As for Volpe-Beringer, she flew under the radar in the early weeks of the season, getting safe scores for the first three weeks in a row before receiving a high score at last in “The Ultimate Upcycle.” However, she got her first low score in “Longshore,” and she has yet to win a challenge, so she might not have impressed the judges enough to keep her around if she stumbles for a second week in a row. She ranks second in our predictions with 3/1 odds of being sent home.

SEEChelsey Carter is only ‘Project Runway’ designer without a low score after 7 weeks: Is she the real season 18 front-runner?

Kim is next in line with 10/3 odds despite high scores in “Only One You” and “Longshore.” That may be because, after being hospitalized in week two from what appeared to be some kind of exhaustion, she has continued to ail. She was feeling feverish in “Only One You,” and she needed attention from a medic in “Longshore.” Bravo’s preview for episode eight suggested that she has still not recovered. If this keeps up, there may come a time when she has to put her health above the competition, which would be a shame given how good her designs have been in recent weeks.

But to paraphrase the recent episode title, there is only one Dayoung Kim, and she won’t be able to design anything if she works herself into the ground.