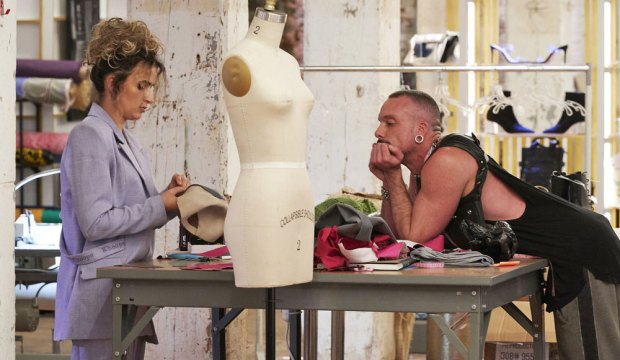 Geoffrey Mac and Victoria Cocieru have the best chance to win “Project Runway” according to the combined predictions of fans who have placed their bets for the finale here in our predictions center. So which one do you think has the edge?

As of this writing we’re giving Mac the advantage with odds of 17/20. He took the lead in our odds after he won his second design challenge in “Live and Let Tie Dye,” in which he created a gorgeous army-green dress that guest judge Leslie Jones liked so much that she exclaimed “That’s mine!” as Mac’s model walked down the runway. He struggled with fit in the “Olympic Game Plan” challenge the next week, but then he came right back in “The Height of Avant-Garde Fashion” by wowing the judges with his innovative use of latex. That earned him a spot in the final four, and during the judges’ deliberations Nina Garcia noted that Mac has been gaining momentum throughout the season.

Cocieru ranks second with 23/10 odds. She has had the opposite trajectory throughout the season. She seemed unstoppable early on, getting five high scores out of the first six challenges. But then she hit a speed bump, struggling to adapt her personal aesthetic to special guest Ashley Longshore and then struggling to find new ways to express that aesthetic in different ways after Christian Siriano warned her that her designs were starting to look the same. She surprised them with an avant-garde look that was more romantic than her previous work, and though they had mixed feelings about how her dress was held up by an earring, they decided they wanted to see a full collection from her.

The other two finalists trail in our forecasts: Sergio Guadarrama with 8/1 odds and underdog Nancy Volpe-Beringer with 22/1 odds. Do you agree with our consensus that the winner of season 18 will be Mac or Cocieru? Or are we underestimating their other rivals?