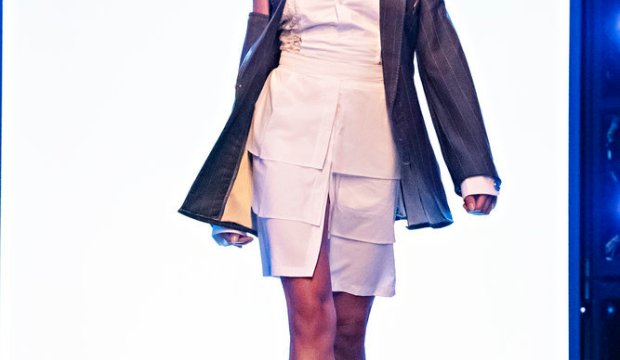 Marquise Foster has had a turbulent journey on “Project Runway” this season, starting with an early win and followed by a couple of low scores, then elimination, then an unexpected return, and back to high scores and another win. But did the judges get it right about which of his looks excelled and which failed completely? Click above for our countdown of all of his looks from worst to best, updating as the season progresses. Do you agree with our choice for his number-one design?

The self-taught designer has been distinguished by his unisex creations and his use of prints, so it was fitting that he won the second challenge, “Cats of the Urban Jungle,” with an animal-print look that blended masculine and feminine elements. However, he struggled after that, landing in the bottom two in the “Ultimate Upcycle” Goodwill challenge and the “Sew 80’s” Cyndi Lauper challenge.

He survived those by the skin of his teeth, but then he was eliminated in “Project Runway X Ashley Longshore,” where he was done in by his poor construction of a blouse and, perhaps surprisingly, his ineffective use of the pop art print he chose for his design. Under normal circumstances, that would have been the end of the road for Foster, but the following week Dayoung Kim had to drop out of the competition for health reasons, which prompted Foster’s return.

He made the most of his second chance, getting a high score as soon as he returned in “Sheer Genius.” Then he got to strut his stuff on a menswear challenge that was made for him: “Suit Yourself,” in which he reinvented a tuxedo that played with gender expression and won him his second challenge of the season. It just goes to show that the competition isn’t over until it’s over. And sometimes it’s not over even when it’s supposed to be over. Which of the following Foster looks are your favorites?