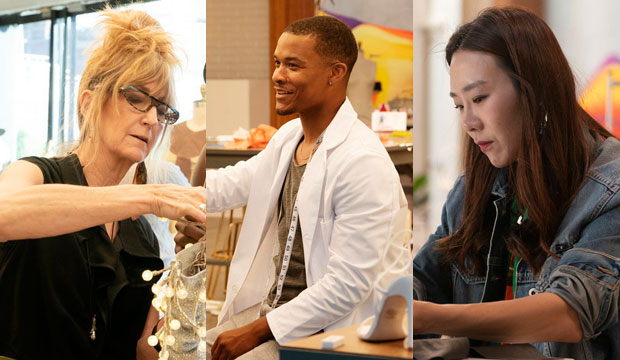 Season 18 of “Project Runway” has cut the field in half, so it’s getting tougher and tougher for the judges to decide who to send home. That may be bad news for Delvin McCray, Nancy Volpe-Beringer and Dayoung Kim, who are the only designers remaining who still haven’t won a design challenge. So if they have a bad week, will the judges give them the benefit of the doubt or dismiss them outright?

It’s not guaranteed that the judges will eliminate one of those three on an off night. After all, the bottom three in last week’s episode, “Project Runway X Ashley Longshore” included two past challenge winners (Victoria Cocieru and Marquise Foster) along with Volpe-Beringer. But instead of sending home the designer who never won, they ousted Foster.

Nevertheless, the judges do take past performance into account when deciding who to send home. Based on design alone, I think Cocieru probably would have gotten the boot in “Longshore” for stubbornly refusing to showcase the pop art print she chose. But not only had Cocieru won a challenge before, she had earned high scores in five challenges total, more than any other designer thus far.

Foster, on the other hand, didn’t get a single high score from the judges other than the challenge he won. And “Longshore” was his third low score in four weeks, which undoubtedly factored into the judges’ decision to send him packing instead of Volpe-Beringer, who landed at the bottom for the first time in that challenge.

Nevertheless, going seven weeks without winning when they’re up against five designers who have won makes these three uniquely vulnerable, especially after Brittany Allen became the first designer to win her second challenge. So will Volpe-Beringer, McCray and Kim step up? For that matter, will Kim even be healthy enough to step up after feeling ill for weeks?