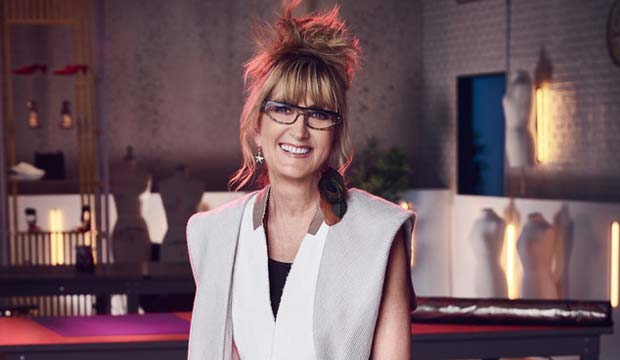 With just seven designers still competing on “Project Runway,” almost everyone remaining is pretty much on a higher playing level.

That includes Nancy Volpe-Beringer, who at the age of 64 is the oldest contestant to ever to compete on the show. The Philadelphia native decided to pursue her dream of  becoming a fashion maven and went to college to get a master’s degree in design. She already has a thriving business but her exposure on the Bravo show will likely raise her profile, especially since she has been keeping up with her more youthful competition.

But agism rears its head in a preview clip of this week’s episode set in the penthouse living space shared by designers. It basically proves Nancy is seen as a threat to at least three of her rivals — Brittany Allen, 29, Victoria Cocieru, 27, and Delvin McCray, 25. Unbeknownst to the trio who are gathered in the dining area at 7:45 a.m., Nancy and her closest ally, Sergio Guadarrama, are sitting on nearby bench in a hallway.

Sergio, who is 30, often designs outfits for women of a certain age. He has become close to Nancy, as we learned on last week’s episode. She shares her feelings about the current challenge that involves a re-invention of the tuxedo. “I actually have less craziness today than I did two challenges ago. So my cool pants are in great shape.”

The camera then focuses Brittany, who asks Delvin and Victoria who they think will end up in the bottom three this time. Says Delvin: “I’d say between you and Nancy. Nancy’s pants are cool.”

SEE ‘Project Runway’ recap: Who showed the right amount of skin in ‘Sheer Genius,’ and who was shown the door? [LIVE BLOG]

Victoria adamantly chimes in: “No, no. It’s the same thing. It’s exactly the same thing.” A clip of  Nancy’s previous Ashley Longshore ensemble with a massive coat appears on screen. Brittany adds, “And apparently the top looks liks sh**.” Nancy, looking sad, says, “I don’t think they realize I can hear them.”

Apparently not, since Victoria goes on to say, “The fabric is OK, but when she walks, it won’t look nice.” Delvin: “The glamorous garbage bag.”

Sergio’s response to their trashing Nancy within earshot: “I dont’ think the younger designers get Nancy because they only see her age. But she definitely has a distinct point of view and that’s really what the judges are looking for. She’s going to sneak up on them.”

Meanwhile, Delvin says: “No one is going to be saved. We’re going to cut off all the fat.”

Watch the clip below to see how this tense and highly awkward situation plays out and how the younger designers react to being caught trash-talking Nancy while she stands up for herself and her abilities. What is that famous saying?  “Whatever doesn’t kill you makes you stronger!” Tune in to Bravo on Thursday at 9 p.m. ET/PT to see if Nancy proves these kids wrong.