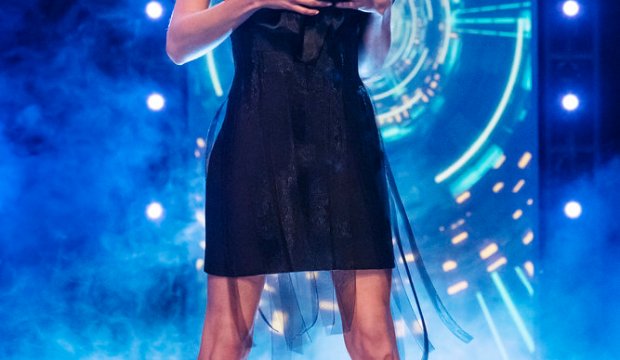 When Nancy Volpe-Beringer was announced as a contestant for “Project Runway” season 18 at age 64, she made history as the show’s oldest designer ever. I honestly wasn’t sure how far she’d make it in the competition, since the winners skew young and fashion is all about what’s modern and now. But she has made it to the top seven, though I don’t think she’s quite gotten the credit she deserves from the judges or her fellow designers. Click above to see how we rank all of her looks so far from worst to best.

After nine challenges, Volpe-Beringer is one of just two designers remaining who hasn’t won a challenge yet, along with Delvin McCray. I myself would probably have given her the win for her “Ultimate Upcycle” look with its backwards shirt and denim skirt created by reconstructing clothes from Goodwill, but the judges were in the middle of their love affair with Victoria Cocieru, who won for one of her many strappy, asymmetric, deconstructed dresses. Volpe-Beringer got another high score for her editorial dress in “Sheer Genius,” but that win went to her workroom buddy Sergio Guadarrama, so she didn’t mind.

But she has also landed at the bottom twice when I don’t think either look was actually all that bad. Come to think of it, I don’t think she has designed any looks that were entirely unsuccessful. I agree with the judges that her “Project Runway X Ashley Longshore” outfit was too big, but the pants were super chic. And though the judges were right to knock her for repeating those “Longshore” pants in “Suit Yourself,” I thought it was a flattering design in a gorgeous fabric.

It’s not just the judges, though. The other designers seem not to appreciate her either. She annoyed McCray with her ornamental demolition in the “Sleigh the Runway” unconventional materials challenge. Then she felt left out by her fellow designers during the “Sew 80’s” team challenge (she had a point, but to be fair the bad communication went both ways in that case). And perhaps most hurtfully, she overheard McCray, Cocieru and Brittany Allen insulting her behind her back in “Suit Yourself.”

It’s odd that such a seemingly lovable designer is one the most controversial at this stage of the competition. But the fact that she has made it this far is a remarkable accomplishment on its own. And if she wins she’s set a new record by a wide margin. Not only would she be the first winner in her 60s, she’d actually be the first winner over 40. To date the oldest champs in the show’s history have been Seth Aaron Henderson (season seven) and Kentaro Kameyama (season 16), who were both 38 when they prevailed. What do you think of her work so far? Vote in our poll below.