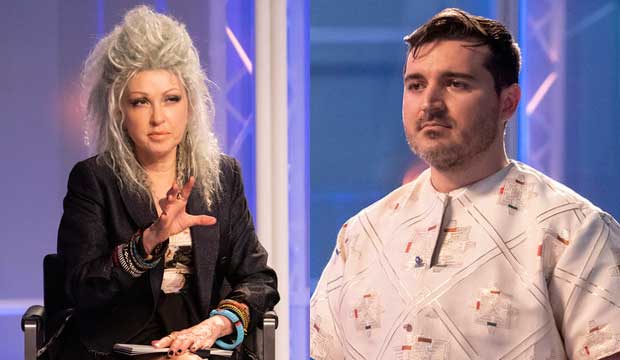 It was bound to happen eventually: overconfident “Project Runway” contestant Sergio Guadarrama got his first low score from the judges in “Sew 80’s,” and it went just about how I thought it would go. It was maybe even a little worse. Not only did he dismiss their criticisms out of hand, he also dealt guest judge Cyndi Lauper a backhanded insult.

Lauper told him she would never wear his look, an attempt at 1980s pop-punk that looked like some kind of sheer parachute dragging behind his model. But Guadarrama fired back that he designed “more sophisticated” garments for clients over 40, so if the judges didn’t like it, “that’s not my problem.”

So how would you take that if you were Lauper? She said she’d never wear it, and he said that his clients were sophisticated women over 40. He didn’t come right out and say that Lauper wasn’t sophisticated enough to wear his clothes, but she is over 40, so maybe he just meant that she’s not as sophisticated as other women over 40? Yikes. Perhaps he didn’t intend to put down Lauper, but that was the implication.

And he didn’t seem to regret any of his comments. When Tyler Neasloney put his foot in his mouth in “The Ultimate Upcycle” by bringing Karlie Kloss‘s husband into it, he assured Kloss after he was eliminated that he didn’t mean anything derisive with his comment. Guadarrama, meanwhile, told Dayoung Kim that he didn’t regret anything he said, and he later commented that if your look is “confusing” to the judges, that’s when you’re really changing the world.

Brandon Maxwell was taken aback by Guadarrama’s defensiveness. He didn’t understand why anyone would enter a competition like “Project Runway” and be so dismissive of the process. Perhaps Guadarrama thought he could win the show easily and that would help him promote his brand. But refusing to grow and learn from experience is a good way for any artist to stagnate. That may not bode well for him going forward.