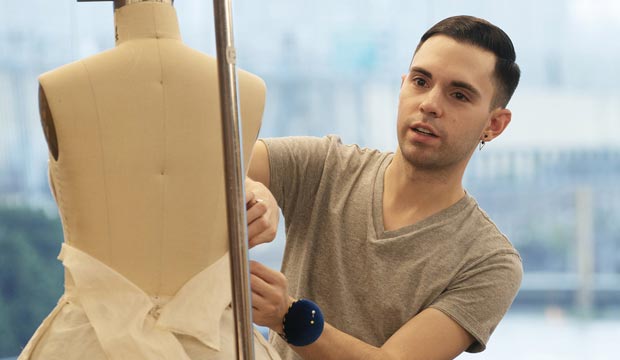 Tyler Neasloney had a tendency to throw shade on “Project Runway” this season, but he usually took it as well as he dished it out, joking during his negative “Sleigh the Runway” critiques that the judges roasted him “like a Christmas ham,” and then acknowledging at the beginning of “The Ultimate Upcycle” that he had become the show’s “most popular bottom.” But he might have stepped over the line at the end of “Upcycle.”

The challenge was to use secondhand Goodwill finds to create a new stylish look for host Karlie Kloss to wear in Paris. The judges didn’t like it. At all. (I thought they were way too hard on his look, but fashion is subjective.) Brandon Maxwell argued that he couldn’t imagine Kloss wearing it anywhere, to which Neasloney replied, “Not even to dinner with the Kushners?”

SEE‘Project Runway’ recap: ‘The Ultimate Upcycle’ sent the designers to Goodwill, but which look belonged in the trash? [UPDATING LIVE BLOG]

Kloss was taken aback by that statement, and from her speechless reaction it looked like she was trying to process exactly what he meant by that. Honestly, so was I. The safe designers who watched the runway critiques from backstage covered their faces in horror. The show replayed that comment after the commercial break, and I had to watch it through my fingers.

Kloss is married to Joshua Kushner, brother of Jared Kushner, which makes Kloss an in-law of the Trumps. So throwing out the Kushner name apropos of nothing sounded like some kind of veiled political jab, though it wasn’t clear what statement he was making or if he was trying to make one at all. His shade is usually better calibrated than that. But Kloss was cross and told Neasloney to stick to the challenge.

Neasloney was ultimately eliminated — not for the comment but because this was the third time in a row he’s been at the bottom of the judges’ scores and he was joined there by two other designers who have been at the top of previous challenges (ShaVi Lewis and Marquise Foster). To his credit, he told Kloss after he was eliminated that he didn’t intend any shady subtext with his comment, and he bowed out gracefully.

What did you think of that uncomfortable runway moment? Did Neasloney really cross a line, or was his statement innocuous?