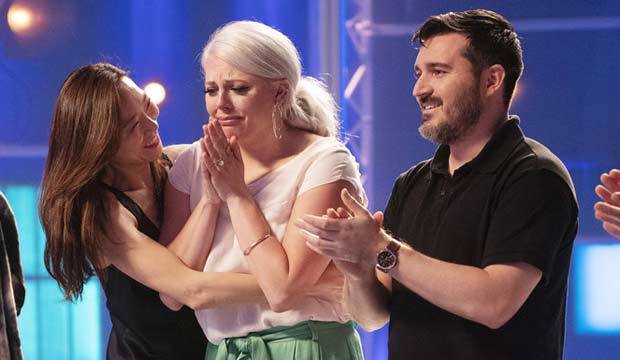 After four weeks of competition, who’s the front-runner to win “Project Runway”? “I hope Brittany’s going to win. I really do,” argued Tyler Neasloney during the “Runway” after-show after he was eliminated in “The Ultimate Upcycle.” Christian Siriano didn’t expect that answer, but Neasloney explained, “Brittany has such big dick energy.”

A lot of our readers agree with Neasloney, but Brittany Allen is not quite the front-runner yet. She’s closing in on the top spot, though. As of this writing she ranks a very close second in our odds, which are based on the combined predictions of “Runway” fans who place their bets every week right here in our predictions center. She has improved to 29/10 odds, her strongest showing yet — even stronger than right after she won the first design challenge of the season in “Blast Off.”

But former front-runner Delvin McCray has taken back the lead on our racetrack. He had been the favorite early on, but last week our readers switched to Marquise Foster as their favorite to take the title. But unfortunately, Foster got one of the judges’ lowest scores for his messy look in “Ultimate Upcycle” — it was literally held together with double-sided tape. So he has dropped in our forecasts all the way to sixth place with 35/1 odds. They’re not kidding when they say, one day you’re in and the next you’re out.

SEE‘Project Runway’ preview: Cyndi Lauper is in the house, but it’s a team challenge and notes Delvin, “Everyone is losing their …” [WATCH VIDEO]

Rounding out the top three in our predictions is Nancy Volpe-Beringer, the oldest contestant in “Runway” history at age 64 — as she keeps reminding us. She kept advancing safely through the competition without a single critique from the judges, but she was finally singled out in “Ultimate Upcycle,” where she was the runner-up in the challenge. Now she’s a serious contender for the title with 9/2 odds.

Perhaps surprisingly, Victoria Cocieru only ranks fourth with 7/1 odds. Not only did she win the “Upcycle” challenge, she has never had a low score and she has gotten high scores for three challenges in a row. Based purely on her stats so far, she’s way out front, but the fans we’ve polled remain skeptical. Maybe she needs her own lab coat like McCray.