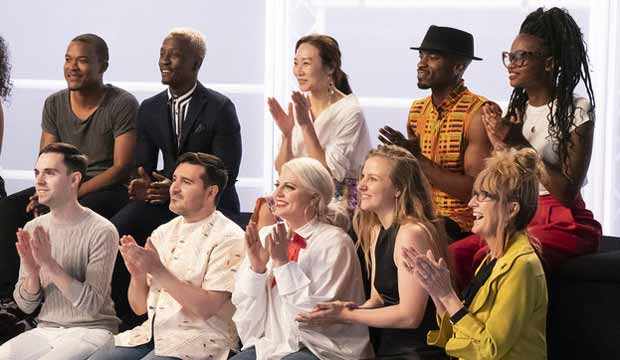 We have a new “Project Runway” front-runner, at least according to the combined predictions of the fans we’ve polled here in our predictions center. After two weeks of leading our odds, lab coat-wearing aspiring couturier Delvin McCray has slipped to second place. Now our readers think Marquise Foster has the advantage. He currently gets leading odds of 43/20. Do you agree? Which way do you think the tide is turning? Make or update your own predictions here.

Foster won a previous challenge — his animal-print streetwear in “Cats of the Urban Jungle” was a hit with the judges — but that was three weeks ago. So his rise may reflect more of a lack of confidence in McCray, who was the runner-up in that same challenge, but struggled to figure out how to use unconventional materials in the last episode, “Sleigh the Runway.”

We’re also still waiting for McCray to actually win a challenge. The one time he came close he was bested by Foster, and his other looks have gotten safe scores, not high scores, so maybe he’s more of a middle-of-the-pack designer. He may wear the uniform of French ateliers, but he hasn’t quite walked the walk yet, at least not where the judges are concerned. Nevertheless, he’s a confident designer who tends to finish early and sends complete, successful looks down the runway even if he hasn’t won yet, so he remains in our top two, now ranked second with 16/5 odds.

They’re followed by Brittany Allen in third place, also with 16/5 odds; she struggled during the “Sleigh the Runway” unconventional materials challenge, but the judges gave her a pass since she had proven herself by winning the “Blast Off” challenge in week one. And in fourth place with 15/1 odds is Sergio Guadarrama, who won the “Sleigh” challenge and got a high score in “Blast Off,” but whose cocky attitude and dismissal of mentor Christian Siriano‘s advice may come back to haunt him.

Do you agree that those are the four designers with the best chances to win? Who might we be underestimating?