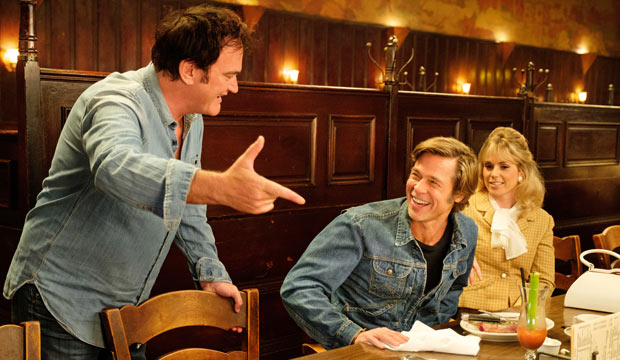 In the Broadway show “Gypsy” — a biopic about stripper Gypsy Rose Lee — there is a song titled “You Gotta Have a Gimmick.” When you are a Oscar nominee, however, you gotta have a narrative to complement your performance, something you can talk and brag about in interviews and on TV talk shows to prove that you gave your all to the art of cinema.

How many times did we read or hear that Leonardo DiCaprio suffered for his art during a grueling shoot for 2015’s “The Revenant” in which he played 19th-century frontiersman Hugh Glass who is left for dead after he is attacked by a grizzly bear? Not only did he chat endlessly about eating raw bison liver, he spent nine months in remote and frigid regions of Canada and Argentina making the film. As the actor told Yahoo Movies, “I can name 30 or 40 sequences that were some of the most difficult things I’ve ever had to do. Whether it’s going in and out of frozen rivers, sleeping with animal carcasses, or what I ate on set — enduring freezing cold and posible hypothermia constantly.”

The end result: He finally won an acting Oscar on his fifth try, a journey that began with a supporting nomination for his work on 1993’s “What’s Eating Gilbert Grape” followed by Best Actor nods for 2004’s “The Aviator,” 2007’s “Blood Diamond,” 2013’s “The Wolf of Wall Street.”  If there were a prize for best anecdotal material to help you finally win an Academy Award, Leo would have easily claim that, too.

Not all award season narratives involve sacrifices made during filming, however.  The narrative can involve a comeback, a physical transformation, major talents that never got their full due, a do-over for a previous win for a lesser film, switching up genres, inhabiting a well-known figure, a long-denied win in a career spanning decades or even the idea for a song.

QUENTIN TARANTINO: It’s shocking, but a Quentin film has never won Best Picture and, while he’s prevailed twice as winner of Best Screenplays (“Django Unchained,” “Pulp Fiction”), he’s never won Best Director either. Outrage! When “Once Upon a Time in Hollywood” opened, he reminded fans that he would retire after making his 10th film. Perhaps a shiny trinket would change his mind.

BRAD PITT: Poor Brad is loooong overdue to win his first chunk of academy gold for acting. Yeah, sure, he won as a producer of Best Picture winner “12 Years a Slave,” but no, no, no, no, that’s not enough. Just ask fellow Hollywood hooligan George Clooney, who bagged Oscars for producing “Argo” and for his acting in “Syrianna.”

RENEE ZELLWEGER: She had us at “hello” in “Jerry Maguire” and vied for Best Actress for both “Bridget Jones’s Diary” and “Chicago” before winning a supporting prize for her portrayal of a sassy mountain woman in “Cold Mountain.” But her status took a nosedive once the actress committed the ghastly sin of turning 40. After a six-year hiatus, she returned in “Bridget Jones’s Baby” and three years later Zellweger has worked a show-biz miracle by transforming herself into a late-life Judy Garland in “Judy,” whose career downturns she certainly can relate to.

JOAQUIN PHOENIX: As Arthur Fleck, a sociopath and abused loser who eventually becomes Batman’s arch nemesis, the actor who is practically in every scene in “Joker” pushes himself to the limit both physically (he lost 52 pounds for the role) and mentally as he struggles to control his character’s inappropriate pathological laughter.  Phoenix’s origin story eventually explodes into an agonizingly visceral depiction of mayhem and madness that has rarely been seen before. It seems odd that after being nominated for his supporting role in Best Picture winner”Gladiator” and his lead parts in “Walk the Line” as Johnny Cash and “The Master” as an acolyte of religious cult leader, it would be a comic-book character that could land him a win.

EDDIE MURPHY: The “Saturday Night Live” breakout was big-time box-office bait in the ’80s and ’90s with starring roles in adult comedies and family films. But even a comic wants to be taken seriously now and then. In 2006, Murphy took a supporting dramatic role in the musical “Dreamgirls” as James “Thunder” Early, a character inspired by such soul singers as James Brown, Jackie Wilson and Marvin Gaye. He was duly nominated for a supporting Academy Award and won a Golden Globe. But he would lose the Oscar to Alan Arkin in “Little Miss Sunshine.”  He notoriously stomped out of the venue after Arkin’s name was announced. “My Name Is Dolemite” might not put him on the ballot again — comedy is not the academy’s go-to genre after all — but his return has been its own reward for us and him.

AWKWAFINA: It didn’t quite work out for Murphy, but switching genres — especially going from comedy to drama — often catches Oscar’s eye. The deft rapper and fierce funny lady scored some major screen time in big-screen ensemble pieces in last year’s all-female “Ocean’s 8” crime caper as well as the amusingly romantic “Crazy Rich Asians.” She even became the second East Asian female celeb after Lucy Liu to host “Saturday Night Live.” But the funny lady, a child of a Chinese-American father and South Korean mother, boldly moved into drama as the star of Lulu Wang’s “The Farewell.” She could easily slip in the Best Actress category since the academy often reward actors for dropping the funny, such as Robin Williams in “Good Will Hunting” and Sandra Bullock for “The Blind Side.”

MARTIN SCORSESE: Did you find that Scorsese’s directing and Best Picture wins for “The Departed” fully satisfying? I sure didn’t. It was a remake of 2002 Hong Kong film, “Infernal Affairs,” and while it was entertaining, it was no “Raging Bull” or “Goodfellas.” This year, however, there is no pretty-boy first-time actor like Robert Redford (“Ordinary People”) or Kevin Costner (“Dances With Wolves”) blocking  his path and keeping him from claiming what is rightly his for “The Irishman.”

ANTONIO BANDERAS: Is anyone else upset that this gorgeous and wonderful Spanish actor has never won a major showbiz honor or has been considered for an Oscar before? Happily with “Pain and Glory,” he and his most notable collaborator, director Pedro Almodovar, have made an enticingly mature portrait of an artist as an older man — one that is gorgeous to look at and not all that somber considering it is about a film director whose life and career is in decline and he is flirting with heroin addiction.

MARY STEENBURGEN: Back in 1980, this actress won a supporting Oscar in “Melvin and Howard” as a runaway wife whose husband has a fateful encounter with billionaire Howard Hughes. She works at a sleazy strip club but is convinced by her spouse to appear on a TV talent show where her tap-dancing skills earns her the top prize of living room furniture, a piano and $10,000 cash. Flash forward nearly 40 years later, and the actress could very well be up for an Academy Award in the Best Song category. In 2007, she woke up after a minor surgery that required general anesthetic and soon began hearing music in her head all the time. She took lessons and, by 2013, Steenburgen had written nearly 50 tunes. Now she could be up for “Glasgow (No Place Like Home)” as performed by Jessie Buckley in “Wild Rose.”

TOM HANKS: What does a the nicest guy in Tinseltown have to do to win an Oscar in this century? He won back-to-back Best Actor trophies for “Philadelphia” and “Forrest Gump” in 1993 and 1994 and was nominated for “Big,” “Saving Private Ryan” and “Cast Away.” But then he was totally ignored by the academy for lauded work in “Captain Phillips,” “Saving Mr. Banks,” “Sully” and “The Post.” Well, let’s hope a nice guy playing an even nicer guy in the guise of Fred Rogers in “A Beautiful Day in the Neighborhood” does the trick and earns him a supporting Academy Award.

Taylor Swift will earn the most Grammy nominations, according to our readers, but just how many could…

R.J. Cutler on his Showtime documentary 'Belushi': 'He was of his time and so far ahead of his time'…

The Killers could make a killing in Grammys rock categories, as could Tame Impala, Coldplay, Haim and…