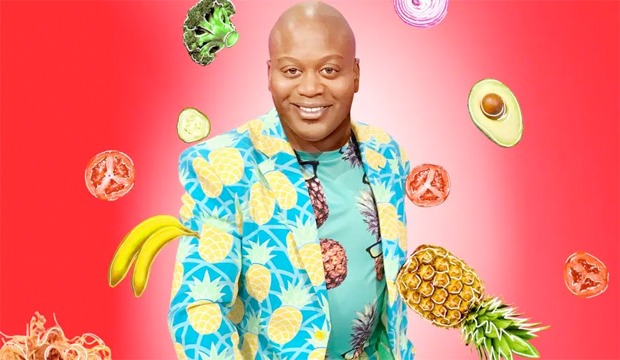 Quibi is the latest streaming service offering original programming, but this one is different: it features strictly mobile content designed to be consumed in “quick bites.” The short form shows on Jeffrey Katzenberg and Meg Whitman‘s platform all include A-list names and impressive production values, just like you’d see on other channels. But there’s a twist. Instead of sitting through a 60-minute episode of, say, “Top Chef,” you can watch Quibi‘s cooking competition “Dishmantled” in only 6 minutes. That’s shorter than it took me to write this paragraph.

Tituss Burgess hosts this outlandish reality show, in which mystery food dishes are shot out of a cannon at blindfolded chefs, who then have to recreate them in 30 minutes. “Y’all ready to watch me blow some s*** up?” Burgess coyly asks in the series premiere. Each episode’s $5,000 prize is awarded to the chef who correctly tastes the most ingredients and puts them into their own plate.

While Burgess isn’t a judge because he already knows the secret dish, he is joined by special guest panelists including Antoni Porowski, Dan Levy, Wolfgang Puck, Jane Krakowski, Antoni Porowski, Rachel Dratch, Roy Choi, Michael Che and Erika Jayne. “Dishmantled” has already been renewed for a second season by Quibi, so we can all expect more explosions in our future.

“Blowing stuff up is terribly satisfying,” Burgess told Gold Derby Senior Editor Joyce Eng in a recent interview (watch below at 16:30). He adds, “It combined everything I love: blowing things up and food and cooking.” Is there a dish he’d like to see explode on the second season of “Dishmantled”? “The messier the better!” Burgess proclaims. “I don’t know, maybe a lasagna, maybe beef stew — something that will just smother everywhere and be nearly impossible to recreate.”

Burgess is no stranger to streamers, earning four consecutive Emmy nominations for playing Titus Andromedon on “Unbreakable Kimmy Schmidt.” Even though he didn’t take home an Emmy, he did win Gold Derby’s prestigious honor of Comedy Supporting Actor of the Decade for the 2010s. He’ll have one last shot at an Emmy this year for Netflix’s interactive “Kimmy Schmidt” TV movie.