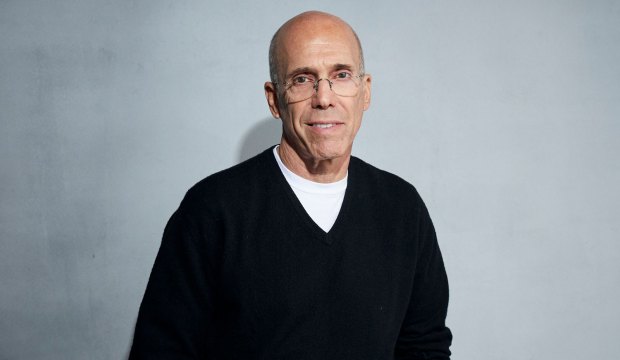 Just weeks after Quibi‘s $1.8 billion with a “b” launch, CEO Jefferey Katzenberg admits “100% regret” about his phone-only platform. Timing was everything. Now he says Quibi will offer a TV option. It also might be up for traditional awards like Emmys and Critics’ Choice in certain categories. Movies and Oscars, not so much. And don’t ask him to produce next year’s show. In a candid phone call, the former DreamWorks co-founder talks hiccups and successes in his new venture.

Gold Derby: What have you learned since you launched?

Jeffrey Katzenberg: “We’ve learned a whole lot, but at the top of the list? People are loving movies in chapters. People are coming back every day. The completion rate — in other words, you start something and go all the way and finish it — is extremely high. And that’s true across the entire Quibi platform. It’s as high as any platform anywhere. It may be the highest. That’s great because people are wanting to stay with these stories.”

GD: So to be clear, consumers have a better chance of finishing a Quibi movie than one on Netflix?

GD: So you have no regret about launching in the middle of a pandemic with people unable to watch your content on TV?

JK: “I have 100% regret about it. The good news about being a startup and being entrepreneurial is that when your customer talks to you, if not shouts at you, you must listen. And so literally we will launch, in less than two weeks, an update for the app that will let people watch Quibi on their TV set. That’s something we didn’t anticipate. And obviously we didn’t realize the world would be sheltered in place, literally. If that’s what the customer wants it’s our job to give it to them.”

GD: The rules are changing for Oscar consideration. Could a Quibi film ever win an Oscar?

JK: “I don’t think we will get theatrical releases.”

JK: “Right, but we designed and shot to look good on your phone which no other content today does. This is just quite different. Different doesn’t mean better or worse, it’s just different.”

GD: How about Golden Globes, Emmys, and Critics’ Choice for television?

JK: “I think we’ll be eligible for TV categories. But these are things people do to you, you don’t get to decide. We certainly are going to be supportive of our filmmakers and storytellers, and anywhere that people want to celebrate their work we are going to lean in and going to support them.”

GD: You mentioned we’re all going back to theaters. Where do you stand on the AMC/Universal dust up?

JK: “I don’t want to offer an opinion on something I’m not up to speed on. But I will say, we all at some point will be going back. It’s not a question of if we’re going back to movies, it’s when. Going to movie theaters is a great experience and there’s nothing like being surrounded by a couple hundred people and watching either a comedy or a thriller or a scary movie. That reaction is contagious and communal and the best way to see it, right? Comedy is best as a shared experience. Laughter makes other people laugh. And we will go back to sports, and we will go back to concerts. There will be a vaccine. There’s no ifs in any of these things, they are certainties. The question is when. But I’m not a doctor, I’m an entertainer. I don’t know when.”

GD: You’re also a producer. Circling back to the Oscars, if you were producing next year’s show, what would you do differently?

JK: “I’ve been out of that business for too long. My finger’s not on the pulse of that world today.”

GD: Are you talking to Quibi talent these days?

GD: How are they doing?

JK: “They’re great. I mean they loved making the content and now seeing it on the platform they’re thrilled. I’ve talked with Liam Hemsworth, Christoph Waltz, Chrissy Teigen, Chance The Rapper, Sophie Turner and Anna Kendrick, and the beauty of platform is we have so many great people making content. Chris Paul has a new show coming out in two weeks, and the ‘Reno 911’ gang are coming back next week. Frankly, everybody made great content. Hollywood showed up and made for me and this platform, stuff that is really, really strong. And the people who’ve downloaded the app and watched it, they’re the ones that matter and they’re voting with their time. And they’re spending more time watching more content than we thought they were going to. Now, how that’s going to change when we get back out of our homes again, we don’t know, but we’re pretty optimistic.”

JK: (Laughs) “I don’t but I know where to send a smoke signal when I need him.”