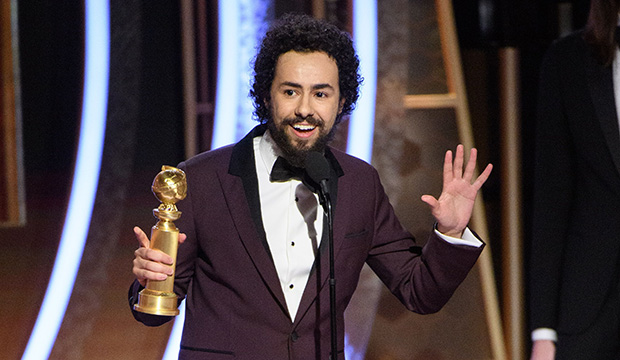 The Golden Globe Awards tossed out its usual curveballs on Sunday, but one of the most unexpected ones was what it didn’t do. As we all know, the Hollywood Foreign Press Association loves anointing newbies on the TV side, but this time, it defied expectations and only honored a freshman show in one category — the fewest wins for first-year shows since 2009, when there were only two.

Ramy Youssef took home Best TV Comedy/Musical Actor for “Ramy,” his semi-autobiographical Hulu series that premiered in April. Season 2, which will include Mahershala Ali, will premiere sometime this year. That was the very first award of the night and turned out to be the only one for new shows, as the other regular series prizes went to “older” fare.

“Succession” nabbed Best Drama Series for its second season, becoming the first show since “Grey’s Anatomy” in 2007 to win its first drama Globe for its sophomore run. Its victory was paired with a drama actor win for Roy patriarch Brian Cox. “Fleabag” triumphed in Best Comedy/Musical Series and Best TV Comedy/Musical Actress for Phoebe Waller-Bridge with its second (and final) season. Though it’s her first season on the show, Olivia Colman scored Best TV Drama Actress honors for the third installment of “The Crown.” Meanwhile, the catch-all supporting races went to stars from limited series, Stellan Skarsgard (“Chernobyl”) and Patricia Arquette (“The Act”), but there were no contenders from a first-year regular series in either category anyway.

Eleven years ago, the only first-year honorees were the drama lead acting champs, Gabriel Byrne for “In Treatment” and Anna Paquin for “True Blood.” “Mad Men” nabbed drama series for its second season, the second leg of what would be a three-peat. “30 Rock” swept the comedy/musical series and lead acting prizes for Alec Baldwin and Tina Fey with the second half of its second season and first half of its third. And the supporting races went to limited series and TV movie folks, Tom Wilkinson (“John Adams”) and Laura Dern (“Recount”).

It’s very atypical for the HFPA to go against the fresh blood grain, but its choices this year do make sense. “Succession” and “Fleabag” were both breakouts for their sophomore outings, so their wins were more about being on top of things (while the Emmys had already crowned “Fleabag,” the Globes is the first major awards show to give “Succession” a series win). And Colman is turning out to be one of those actors whom Globe voters just adore (see: Sarah Jessica Parker, who won four Globes in five years for “Sex and the City”). Colman now has a 3-for-3 record at the Globes, all for different projects.

Plus, there weren’t that many freshman contenders either. Youssef was up against first-year nominees Paul Rudd (“Living with Yourself”) and Ben Platt (“The Politician”). “The Politician” was the only one of their three shows to nab a series nomination too, but Youssef survived his show’s series snub to become the first sole nominee to win comedy/musical actor since Don Cheadle (“House of Lies”) seven years ago. Waller-Bridge faced off against three stars from new series — Christina Applegate (“Dead to Me”), Kristen Dunst (“On Becoming a God in Central Florida”) and Natasha Lyonne (“Russian Doll”) — but you know the HFPA had that Globe engraved with her name for months.

With three nominations, “The Morning Show” seemed like it was best positioned to join Youssef in the first-year winner’s circle. Jennifer Aniston was the odds-on favorite in drama actress, where she competed against her co-star Reese Witherspoon, but she was no match for the queen. The Apple TV+ show was also the only newbie in the drama series lineup, where it was second in our odds, which in any other either year might seem like it was an obvious pick for the win.

So does this new decade mean a new Globes of honoring “older” shows? Meh. It’ll probably go back to awarding, like, four newbies next year.