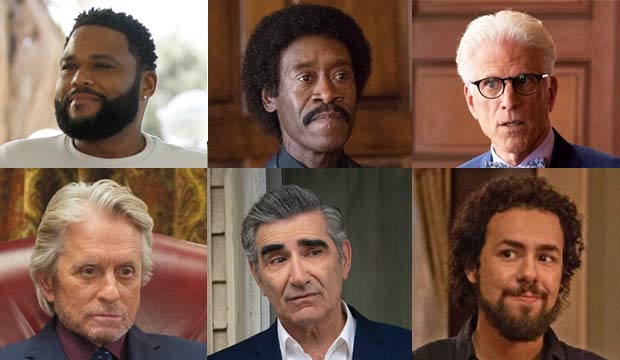 Yes, Eugene Levy (“Schitt’s Creek”) currently leads Gold Derby’s Emmy predictions for Best Comedy Actor, but this race is no laughing matter. Recent Golden Globe champion Ramy Youssef (“Ramy”) is quickly gaining on Levy in our odds, which are based on the combined picks of our Experts, Editors, Top 24 Users and All Star Users. However, if Youssef hopes to stage an Emmy upset, he’ll first have to overcome one huge hurdle: his show isn’t nominated for Best Comedy Series.

The last time somebody won Best Comedy Actor without a corresponding bid for Best Comedy Series was Jon Cryer (“Two and a Half Men”) in 2012. Of course, that was the year the Chuck Lorre sitcom went through a major cast overhaul as Charlie Sheen‘s character was killed off after the actor entered drug rehabilitation. Sheen was replaced by Ashton Kutcher, but it was Cryer who truly shined during the controversy by becoming the new leading man. Emmy voters gave Cryer a hug in the form of a trophy after previously honoring him in the supporting race in 2009.

“Ramy” was nominated for three above-the-line Emmys (lead actor for Youssef, supporting actor for Mahershala Ali and directing for Youssef), which suggests it must have been close to appearing in the Best Comedy Series lineup. Perhaps it would have contended had there been a Top 10 in series as opposed to a Top 8?

Youssef plays a heightened version of himself on the Hulu series, which chronicles the story of a first-generation American Muslim living in New Jersey. Ionically, “Ramy” the show wasn’t nominated for Best Comedy Series at the Golden Globes either, and yet Ramy the actor was still able to prevail. So perhaps it doesn’t matter that the Emmys snubbed it.

On “Schitt’s Creek,” Levy stands out as Johnny Rose, the patriarch of a rich family who loses everything and has to move to a tiny blue-collar town. The Television Academy overlooked this Canadian gem for its first four seasons before finally recognizing it last year with four bids; it added another 15 noms this year. TV academy voters finally discovered “Schitt’s Creek” thanks to a combination of word-of-mouth and Netflix’s acquisition of the old Pop episodes, which they seemingly binge-watched in one fell swoop.

Here are the current Emmy odds for Best Comedy Actor: