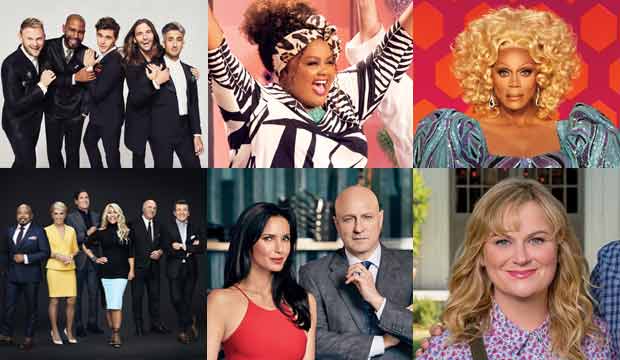 Gold Derby can exclusively reveal the episode submissions for the six nominees in the Best Reality Host category. The contenders are from “Making It,” “Nailed It!,” “Queer Eye,” “RuPaul’s Drag Race,” “Shark Tank” and “Top Chef.”

For “Making It,” the nominees are Nick Offerman and Amy Poehler. This is the second career Emmy nomination for Offerman. This is the 22nd nomination for Poehler with one prior win. The episode entered is “What Are You Made Of?,” which aired December 9 on NBC.

For “Nailed It!,” the nominee is Nicole Byer, who now has her first career nomination. The episode entered is “Jungle Bungle,” which streamed April 1 on Netflix.

For “Queer Eye,” the five nominees are Karamo Brown, Bobby Berk, Tan France, Antoni Porowski and Jonathan Van Ness. Each is on his first nomination except for Van Ness, who has had two prior bids. The episode entered is “Disabled But Not Really,” which streamed July 19 on Netflix.

For “RuPaul’s Drag Race,” RuPaul Charles has won this category four straight years and had two producing wins. The episode entered is “I’m that B****,” which aired February 28 on VH1.

For “Shark Tank,” the six nominees are Barbara Corcoran, Mark Cuban, Lori Greiner, Daymond John and Kevin O’Leary. Each has a first Emmy nomination. The episode entered is “Episode 1101,” which aired September 29 on ABC.

For “Top Chef,” the nominees are Tom Colicchio (1 prior win) and Padma Lakshmi (no prior wins). The episode entered is “The Jonathan Gold Standard,” which aired March 26 on Bravo.

Abubakar Salim: 'Raised By Wolves' taught me to 'be brave, make mistakes and bold, daring choices'…

Cristin Milioti ('Palm Springs'): 'It felt like I was a kid again' [EXCLUSIVE VIDEO…

Sterling K. Brown has never missed a SAG nom for ‘This Is Us,’ and he shouldn’t this year thanks to ‘Birth Mother’