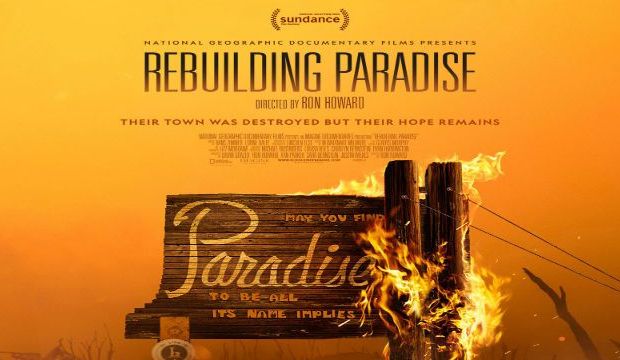 Ron Howard‘s acclaimed documentary “Rebuilding Paradise,” about a deadly California wildfire in 2018, will be presented commercial-free on NatGeo on Nov. 8. That date marks the two-year anniversary of the blaze which claimed the lives of upwards of 85 people. “Rebuilding Paradise” is currently available to rent and buy on multiple streaming platforms and National Geographic Documentary Films has also committed to donating $1 of each purchase to the Wildfire Relief Fund in the month of October.

“We at Imagine Documentaries are thankful to our partners at National Geographic Documentary Films for the continued effort to share this very important and timely film with a wider audience,” says the Oscar-winning director. “There is no doubt that climate change is a contributing factor to the historic fires burning even now on the West Coast, devastating entire communities. This should be a wake-up call – Paradise could be any of us.” The film centers on relief efforts in the wake of the disaster as the community attempts to rebuild and recover.

The documentary, which is a strong contender at the upcoming Oscars, takes on an unfortunate new resonance as California continues to battle wildfires that have wreaked havoc on multiple communities. Just days ago, the August Complex fire was classified as a gigafire, burning over 1 million acres. It is now the largest fire in recorded California history.

“We are proud to continue to share the timely and urgent story of Paradise with viewers around the world,” says Carolyn Bernstein, NatGeo’s executive vice president of Global Scripted Content and Documentary Films. “We hope this film and our impact efforts can bring much-needed attention and aid to the resilient community of Paradise and surrounding areas as they rebuild, especially now, in the face of additional threats from wildfire disasters.”

“Rebuilding Paradise” follows last year’s “Fire in Paradise,” which made it onto the Documentary Short Subject shortlist at the Oscars.