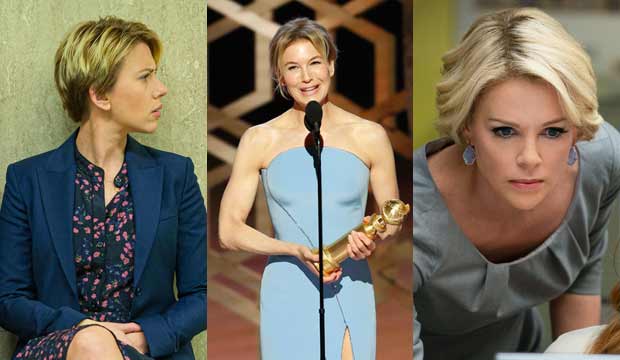 Renee Zellweger (“Judy”) overtook Scarlett Johansson (“Marriage Story”) and Charlize Theron (“Bombshell”) at the Golden Globes for her performance as tragic music legend Judy Garland. So is it a done deal for her at the Oscars too? Not necessarily. We’ve learned from last year’s Glenn Close Globes victory and eventual Oscar loss not to count our chickens before they’re hatched. A few of the Expert journalists we’ve polled say Theron and Johansson is still in it to win it.

Close won the Golden Globe for Best Film Drama Actress last year for “The Wife.” Then she won the SAG Award too. But she was upset at the Oscars by BAFTA winner Olivia Colman (“The Favourite”). So while the vast majority of our Experts (26 out of 31) as of this writing say Zellweger will repeat at the Oscars, a few still think she’s vulnerable.

Three Experts are forecasting an upset by Theron: Tim Gray (Variety), Jazz Tangcay (Variety) and Anne Thompson (IndieWire). Like Zellweger, Theron gives a transformative performance as a real-life figure: former Fox News personality Megyn Kelly. And “Bombshell” dominated the SAG Awards, which indicates that the film has significant support from the acting community, many of whom also vote for the Oscars. But Theron’s role isn’t as emotionally showy as Zellweger’s. Kelly is largely stoic, while Garland sings, cries and struggles with addiction.

And Johansson also has a few potential advantages over Zellweger and Theron. “Marriage Story” is the likeliest of the three films to be nominated for Best Picture, which would show stronger support from the academy as a whole. Johansson is also in another film likely to receive a Best Picture nom, “Jojo Rabbit,” for which she’s also a strong contender for a Best Supporting Actress nomination; voters might want to reward her for her strong year as a whole (she was in “Avengers: Endgame” too). And Johansson is overdue, while Zellweger and Theron have both won Oscars before.

So do you think there’s still a threat to Zellweger’s Oscars candidacy? Or will she sweep the awards season all the way to the Academy Awards?