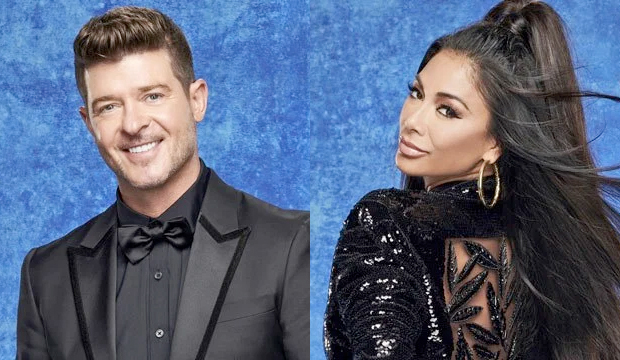 After six celebrity reveals so far on “The Masked Singer” Season 3, two judges lead the pack in terms of having the most correct guesses: Robin Thicke and Nicole Scherzinger. They both scored points by naming Chaka Khan as Miss Monster in Group A and Dionne Warwick as the Mouse in Group B. Jenny McCarthy also picked Warwick, but missed Khan, giving her one point. Alas, Ken Jeong is the only panelist to guess incorrectly each and every week this season. We’re tracking the judges’ scores all season long, so scroll down to see the updated tallies.

Wednesday’s sixth episode threw the judges for loop yet again when none of them realized “Dancing with the Stars” host Tom Bergeron was actually hiding inside the Taco costume. Ken thought it was comedian Martin Short, a choice that Robin openly copied, Nicole guessed it was legend Barry Manilow, Jenny speculated it was talk show host Jerry Springer and guest panelist T-Pain named “Frasier” star Kelsey Grammar.

When host Nick Cannon removed Taco’s shiny red tomato mask, the judges’ mouths shot open in shock. Robin and Nicole had worked with Tom on “DWTS” while Jenny actually wrote the blurb on his book cover. Ken was the only regular panelist not to have a personal relationship with Tom, which Tom joked was “not surprising.”

In his “Masked Singer” live blog, our recapper Denton Davidson had this to say about Taco’s final performance: “Tonight Taco is singing ‘Can’t Help Myself’ by The Four Tops. He’s got a couple of chefs doing some background dancing as he serenades the crowd. Taco has a nice, old-school vibe about him and sounds like a true Vegas entertainer.”

Here’s our running tally of the judges’ Season 3 scores: