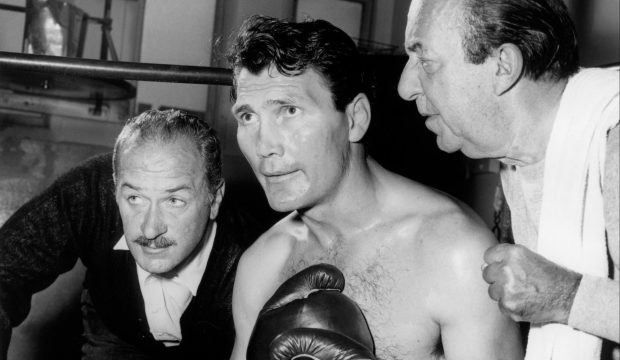 A group of young, scrappy and brilliant writers penned some of the most accomplished dramas presented live during the Golden Age of TV in the 1950s. Writers such as Paddy Chayefsky (“Marty,” “Bachelor Party,” “Middle of the Night”), J.P. Miller (“The Days of Wine and Roses”), Reginald Rose (“Twelve Angry Men”), Tad Mosel (“The Haven”), James Costigan (“Little Moon of Alban”) and Horton Foote (“Old Man,” “Tomorrow”).

But the most influential and best-known of these writers was Rod Serling, who became a superstar as not only creator and writer but host of the landmark 1959-1964 CBS sci-fi/fantasy anthology series “The Twilight Zone,” for which he won two Emmys for his writing. “The Twilight Zone” and even his less successful 1970-73 NBC anthology series “Night Gallery” has overshadowed his earlier work for which he won three Emmys for his writing.

Among his earliest work was the 1953 “Kraft Television Theatre” presentation “A Long Time Till Dawn,” which gave a 22-year-old James Dean one of his first starring roles on the small screen and “Knife in the Dark,” a 1954 episode of CBS’ “Danger” starring Paul Newman — who is seen shirtless in many scenes — directed by Serling’s frequent collaborator, John Frankenheimer. But it was the 1955 “Kraft Television Theatre” drama “Patterns,” which put him on the map. In fact, it became the first live presentation to be repeated four weeks later. It was “Patterns” which gave him his first Emmy Award.

Above all, Serling was a humanist.  Serling, who was wounded in World War II, examined the injustices of life, the relationships between people, racial inequality and the aftermath of war. And “Patterns” is a searing look at ageism and the other machinations of the workplace. Richard Kiley plays a new young executive of a large New York firm who becomes friendly with the vice-president of the company (Ed Begley). But he soon learns from his boss (Everett Sloane) that he was hired to replace the V.P who had devoted his life to the firm. Just over a year later, a well-received film version, also penned by Serling, with Begley, Sloane and Van Heflin replacing Kiley was released.

CBS’ “Playhouse 90” was the Rolls Royce of live dramatic anthology series. And the second installment of the classic show telecast Oct. 11, 1956 was Serling’s “Requiem for a Heavyweight.” Watching the drama is like a kick to the gut. Jack Palance, who won an Emmy, is heartbreaking as a washed-up boxer with head trauma who is exploited by his manager (Keenan Wynn). Ed Wynn, Keenan’s father who was best known for his comedic work, plays Palance’s cutman. Kim Hunter also stars as the caring employment work who tries to get Palance a job out of the ring.

Serling won his third consecutive Emmy for his “Playhouse 90” drama “The Comedian,” directed by Frankenheimer. Based on a novella by Ernest Lehman (“Sweet Smell of Success”), the drama is anchored by an extraordinary performance by Mickey Rooney as the ultimate egotistical TV comedian, beloved by his fans but hated by those who know him. Rooney’s Sammy Hogarth is constantly berating his weak brother Lester (an impressive Mel Torme) on the air, so much so that his wife (Kim Hunter) leaves him for not standing up to Sammy. Whit Bissell also stars as an odious columnist and Edmond O’Brien plays the head writer who is desperate to keep his job he uses jokes written by a writer who had died in World War II.

Besides Serling, “The Comedian” also won the Emmy for single program of the year. Rooney was nominated for his performance, as was Frankenheimer for his direction. Strangely, Frankenheimer lost to Bob Banner for “The Dinah Shore Chevy Show.”

Ironically, his last “Playhouse 90” Emmy nomination was for the 1958 “A Town Has Turned to Dust.” Serling ran into difficulties with the networks and sponsors who censored or forced changes in his work. And that is what happened to “A Town Has Turned to Dust.” Frankenheimer told me in a 1997 L.A. Times interview: “That show was supposed to have been the first show of the opening of the second year of ‘Playhouse 90.’ It was supposed to be what happened to the men who killed Emmett Till, the civil rights worker. The sponsors told the network they would not sponsor it, it was too controversial. We had to rewrite it as a Western. The Rod Steiger character was supposed to commit suicide, but four days before the show went on, the Prudential Insurance Co. said, ‘We are not going to sponsor a show where the principal character commits suicide.’ So, we had to have him from a gunshot wound.”

Serling later said of the experience: “By the time the censors had gotten to it, my script had turned to dust. His widow Carol noted in a 2002 L.A. Times interview with me that those problems with censorship lead to him creating “The Twilight Zone.” “Rod never felt he was a master of science fiction,” she said.  “But Rod thought it was the right time and good vehicle. That was the beauty of it. Through anthologies, he could confront these issues, and the sponsor really never understood him. I think that is part of the reason it is still on, because it’s still timely. These issues have never really gone away.”

In 1970, though, Serling returned to the character drama format with the acclaimed “A Storm in Summer” that was presented on NBC’s “Hallmark Hall of Fame.” Serling explores racial prejudice in “Storm” — a poignant drama about an elderly Jewish deli owner (a memorable Peter Ustinov) who reluctant agrees to host an African American boy (N’gai Dixon) for the summer. Though they begin the summer on shaky ground, the two become deep friends.

His daughter Anne Serling told me in a 2013 L.A. Times interview that “A Storm in Summer” was one of her favorites of her father, describing it as “one of the most beautiful shows I have ever seen.” “Storm” won the Emmy for dramatic program and Ustinov earned an Emmy single performance by an actor in a leading role. Ironically, Serling wasn’t nominated.