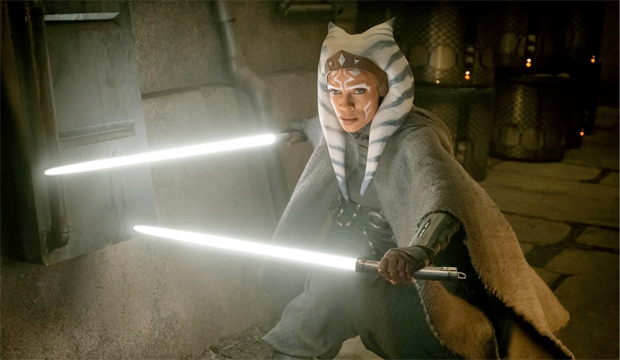 Rosario Dawson catapulted herself into the center of pop culture discussions thanks to an unannounced appearance on Disney Plus series “The Mandalorian.” The unprecedented buzz combined with a captivating performance could land the actress her first ever Emmy nomination.

Dawson appeared in the Season 2 episode “Chapter 13: The Jedi.” She emerged from a foggy forest with two white lightsabers in hand, her face painted in orange and white, and large montrals framing her head. After debuting as the hero of the animated series “The Clone Wars,” Dawson had successfully brought her to life in live action. Fans lost their minds with excitement.

The character proved so popular that Disney+ recently announced a spin-off, simply titled “Ahsoka,” among their impressive lineup of “Star Wars” streaming series. So the eager fan base will be getting more of their beloved character.

It’s possible Dawson could score her first Emmy nomination before her own series even debuts. The actress has appeared in plenty of popular projects during her career, from series “The Defenders” and “Jane the Virgin,” to films like “Rent,” “Seven Pounds” and “Sin City.” Yet one could argue that none of those impressive projects lead to the sheer volume of excitement that Ahsoka caused. This could be due to the fact that audiences had long been “fan-casting” Dawson in the role for years. It was smart of series creator Dave Filoni to listen to those ideas, and now “The Mandalorian” is enjoying the payoff as viewers demand more Ahsoka.

Dawson also contributed some of the most memorable story elements of the series thus far. It is courtesy of her that viewers discover the name of “The Child” is actually Grogu (though I personally prefer The Artist Formerly Known as Baby Yoda). Ahsoka’s ability to communicate with Grogu pays off with tantalizing tidbits about his life at the Jedi temple. She also name drops Grand Admiral Thrawn, setting up a rivalry for her own series but also canonizing the ruthless villain who first appeared in fan favorite novel “Heir to the Empire.” Just as memorable as these plot twists is Dawson’s epic fight scene with Diana Lee Inosanto, channeling classic Akira Kurosawa samurai combat.

SEE ‘The Mandalorian’ mystery: Top 6 candidates who could train Baby Yoda in the Force

The role isn’t just about being a badass, however. We see sides of Dawson that she doesn’t always get to show as an actress. Her Ahsoka has come a long way from her spunky days as padawan to Anakin Skywalker. Dawson keeps a hint of her humor, but this woman is a world weary traveler who harbors great pain and loss. Though she is still spry enough to launch into backflips, her demeanor is more in line with a wise old wizard like Gandalf in “The Lord of the Rings.” The pathos on display is a refreshing contrast to many of Dawson’s earlier performances.

“The Mandalorian” scored a single acting nomination at the 2020 Emmy Awards: a Drama Guest Actor bid for Giancarlo Esposito. Dawson will also be eligible as a guest performer and since Ahsoka is the focus of her episode, the actress has much more material to play with than Esposito had in Season 1. That sets Dawson up to replicate Esposito’s success and score the first Emmy nomination of her career.