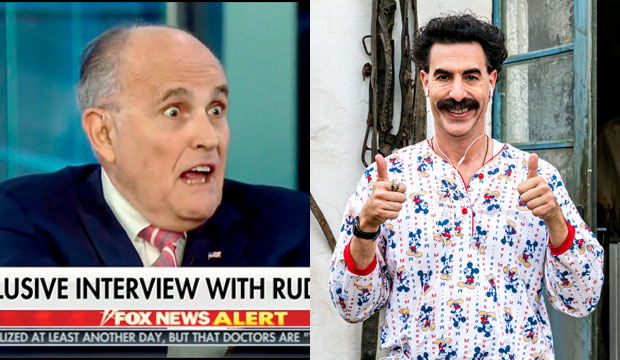 Rudy Giuliani is going to be a big winner this year. Forget about the looming 2020 US presidential election, as there’s a more fascinating contest on the horizon, at the 41st Golden Raspberry Awards, or Razzies, which honor the worst the film industry has to offer each year. This is not Russian disinformation and it is not “fake news.”

The former New York City mayor, once known heroically as “America’s Mayor” in the wake of 9/11, has been a consistent fixture on TV over the last few years in both his capacity as a vocal GOP surrogate and personal attorney for President Donald Trump. Earlier this year Giuliani hit peak notoriety as a central figure in the Ukraine scandal that led to the President’s impeachment by Congress.

More recently, in the lead-up to the 2020 US presidential election, Giuliani returned to the news as an alleged target of Russian disinformation operatives as he has relentlessly peddled an alleged scandal involving Hunter Biden, the son of the Democratic nominee for president, Joe Biden.

And now, just when we think we couldn’t possibly see any more of him, Giuliani is back in the controversial spotlight in “Borat Subsequent Moviefilm: Delivery of Prodigious Bribe to American Regime for Make Benefit Once Glorious Nation of Kazakhstan.” It’s actor-comedian Sacha Baron Cohen‘s follow-up to his 2006 smash hit “Borat: Cultural Learnings of America for Make Benefit Glorious Nation of Kazakhstan.”

In a humiliating scene towards the end of the film, actress Maria Bakalova (who plays Borat’s daughter impersonating a journalist), interviews the former mayor and then invites him into an adjacent bedroom. Giuliani embarrassingly requests Bakalova’s address and phone number before the actress removes his microphone. As he proceeds to lie on the bed and place his hand in his pants, Baron Cohen comes crashing into the room screaming that Bakalova is only 15 and, hilariously, is “too old for you!”

In the aftermath of the film’s premiere on Amazon Prime Video, social media exploded against Giuliani for being caught “red-handed” in a compromising position with a woman he knew to be a minor. Giuliani has predictably denied any wrongdoing, but the scene remains one of the most talked-about of the year.

Giuliani’s likely Razzie success should not be an indication that the film itself is in trouble this awards season, though. “Borat Subsequent Moviefilm,” like its predecessor, has been a hit with critics. It has a 85% fresh rating at Rotten Tomatoes and a score of 68 out of 100 at Metacritic. Likewise, Moore’s Razzie-winning documentaries were well-liked by reviewers. The Razzies simply enjoy taking shots at the much-derided politicians they feature.