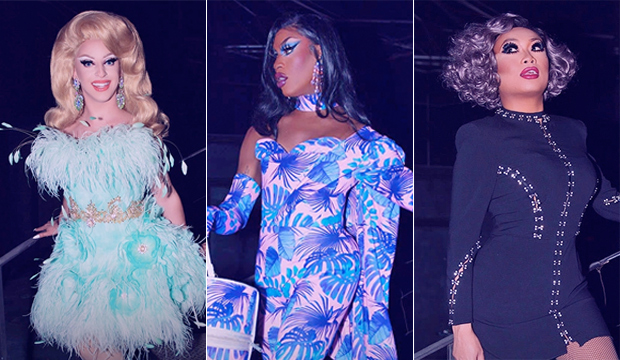 And then there were three. The grand finale of “RuPaul’s Drag Race All Stars 5″ airs Friday, July 24 on VH1, with the trio of finalists — Miz Cracker, Shea Coulee and Jujubee — all praying for their shot at joining the Hall of Fame. The ultimate decision will come down to host RuPaul Charles, who’s been watching each queen closely all season long. Which contestant do YOU think has the most charisma, uniqueness, nerve and talent for this fifth installment of the “All Stars” reality TV show? Vote in poll below for the most deserving queen and then be sure to defend your choice in the comments section.

On paper, Miz Cracker seems like the one to beat as she’s won three main challenges, more than anyone else. This Season 10 stand-out prevailed in an improv challenge (Episode 4’s “SheMZ“), a character challenge (Episode 6’s “The Charles Family Backyard Ball“) and a comedian challenge (Episode 7’s “Stand-Up Smackdown“), showing her true range as a competitor. In terms of her Lip Sync Assassins battles, she tied her first against Morgan McMichaels, lost her second against Roxxxy Andrews and won her third against Kennedy Davenport.

Miz Cracker came into this game with lots of friends, but wasn’t afraid of giving them the chop (i.e. Mayhem Miller and Blair St. Clair) if it meant surviving another week. Earlier this season she seemed to be receiving the show’s “villain edit,” particularly when it came to her harsh words against Ongina — might that influence fans’ perceptions of her in a negative way?

Next in line with two challenge victories is Shea Coulee, the Season 9 finalist who speaks openly about the pain she felt losing to Sasha Velour. This time around she’s excelled at a song challenge (Episode 2’s “I’m In Love!“) and an impersonation challenge (Episode 5’s “Snatch Game of Love“). Shea actually won both of her lip syncs against Alyssa Edwards and Vanessa “Miss Vanjie” Mateo, which makes her a force to be reckoned with if the finale involves any form of lip syncing.

Finally, Jujubee is still in the fight despite only winning the hotel design challenge in Episode 3’s “Get a Room!” It was remarkably her first challenge victory throughout her “Drag Race” journey, which included Top 3 finishes in Season 2 and All Stars 1. This admitted cat lover lost her lip sync against Monet X Change, so she’s the only All Stars 5 finalist who can’t brag about taking down an iconic Lip Sync Assassin. Might Jujubee’s fun-loving attitude push her over the edge in RuPaul’s eyes?