“RuPaul’s Drag Race” fans, are you ready to see your favorite drag queens from past seasons return to duke it out for the honor of joining the Drag Race Hall of Fame? The much-anticipated “Drag Race All Stars 5” season is finally upon us, with 10 of the most memorable contestants back to fight for place in the Drag Hall of Fame. So who sashayed away first and who won the inaugural challenge on “All Star Variety Extravaganza”?

Take note: the format for elimination has been tweaked. Instead of two of queens performing lip syncs for their legacies, one of the girls will go up against an “assassin” from seasons past. If the season 5 all-star wins, she gets a $10,000 tip and gets to decide who to boot. If she loses, the tip gets added to the jar for the following week and the rest of the queens will rule on the elimination.

Below, check out our minute-by-minute “RuPaul’s Drag Race” recap of All Stars 5, Episode 1 to find out what happened on Friday, June 5. Then be sure to sound off in the comments section about your favorite queens on VH1’s reality TV show, who annoys you the most, and who you think will ultimately join the “RuPaul’s Drag Race” winners list.

8:01 p.m. – First to enter tonight was Shea, a challenge beast in her original season and someone we all thought would win until Sasha Velour‘s iconic rose petal wig reveal. Next was Cracker, feeling herself in a baby blue feathery dress. She tells us this season she’s going to be less pre-occupied with perfection and promises to be more free. Next was Alexis, the “Bam!” princess from Puerto Rico and drag mother of Vanessa Vanjie Mateo.

8:04 p.m. – And if you do declare, next in was Blair! She was super young in her original season and now she’s ready to show off the “strong bitch” inside. Next was the very cocky Mariah who is here to tell us that she’s the winner of AS5 based on a renewed sense of stage presence. Then came India, at least the 2.0 version according to her, who wants to show that there’s more to her than anyone remembers.

8:07 p.m. – And then we remet Juju, one of the stars from season 2, and certainly capable of being a veteran to finally take the all stars crown. After Juju came Derrick, once again announcing herself as “the best Britney Spears impersonator in the world,” but ready to prove that she can step out of that box. Right off the bat we learned that Derrick and India are not cordial–drama already? Yas.

8:10 p.m. – The penultimate entrance came from Mayhem who is here to prove that she can live up to the hype that she didn’t in her original season. And speaking of original seasons, Ongina, from season 1!!!, was the last queen to enter and very nervous to come back to the show after such a long time.

8:18 p.m. – When RuPaul Charles greeted them in the work room he immediately made it clear that things would go down differently this season. This season, all the queens will get a vote in who is eliminated each week instead of just the top performing queens of the week. That’s very “Survivor” of them and is going to create an atmosphere for alliances!

8:19 p.m. – For the first mini challenge of the season, Ru called in guest judge Ricky Martin who began the “Reading Is Fundamental” challenge with his own read of Ru. After Ricky’s Spanish language read of Ru (it fell flat), one by one the other girls got to read each other back and forth. Derrick’s reads of India seem to have cut deep based on India’s reactions to them, but everyone was more silent when Ongina’s reads went nowhere. But after all was said and done Ricky called the win a tie between Juju and Blair!

8:25 p.m. – The maxi challenge was an “Extravaganza” that offered the queens the opportunity to show off their own talents and specialties in a variety show. Later, while the queens derobed for the day they wondered what other changes might be coming their way for the season and the beef between India and Derrick continued to unfold…

8:32 p.m. – In preparation for the talent show the girls were worried about proving to the judges that they’ve evolved. For Ongina she was mostly worried that she can compete with the queens that have lived through the growth of the show throughout the recent years. But then it all hit the fan between India and Derrick who argued across makeup stations about the problems rooted in their interactions with Derrick’s boyfriends both online and in the real world in Vegas where they both live and perform.

8:39 p.m. – On tonight’s judge panel was, of course, Ricky, but also the usual suspects Michelle Visage, Carson Kressley and Ross Mathews. In the variety show, Alexis showed off her comedic showgirl vibe, Shea performed a very sexy pole dance, Mayhem delivered a haunting (and quite odd) original song and dance, Mariah gave us a spoken word interpretive dance that left mouths agape and Cracker came out dressed as a pickle for a comedic song and dance.

8:52 p.m. – Having already released a pop music album, Blair performed one of her songs by singing live, Ongina assembled a sort of dance routine, sort of dance catwalk moment using Ru’s songs, Derrick switched it up by throwing together impersonations of celebrities that aren’t Britney, Juju sang a live version of a beautiful ballad and then India closed it out with a high energy dance routine playing off the “drag is not a contact sport” phrase that Ru uttered during India’s original season.

9:03 p.m. – After the show, Ru informed the group that only one top all star would be selected each week to pick one bottom queen to potentially eliminate. The remaining girls would vote for their own bottom queen. Then the top queen would lip sync for her legacy against a secret lip sync assassin for the chance to win $10,000 and send her bottom queen home. If the assassin wins, then the group’s bottom queen would be eliminated instead.

9:05 p.m. – The panel of judges selected Cracker, Alexis and India as potential top queens. Each of them impressed the judges by going out there and having fun and leaving everything they had on the floor. Their bottom options were Derrick for delivering very weak impersonations and continuing to refuse to show herself, Mayhem for having such an unclear presentation and delivery, and Ongina for providing something that was so one-note.

9:08 p.m. – Ultimately, Ru picked India as the top all star of the week (shocker and a huge accomplishment for her!). Ru also picked out Derrick and Mayhem as the two options for bottom queen of the week.

9:14 p.m. – As the first maxi challenge winner, India got the opportunity to choose either Derrick or Mayhem to be eliminated. To help make her decision she spoke with each of them to find out why they want to be in this competition. Derrick told India that she wants to show a “fiercer, darker Derrick” while Mayhem told the other girls (the jury) that she believes she has more to show in the competition than Derrick does. Then Derrick defended her performance to the jury feeling confused and defeated while Mayhem took India up on the opportunity to make a deal/alliance in she keeps her.

9:19 p.m. – After the jury voted and India made her selection, Ru revealed the season’s first secret assassin to face off against India: Yvie Oddly in a battle of Ricky’s hit “Livin’ la vida loca.” Yvie came prepared with a ton of costume changes and reveals, as well as her trademark bending and quirky personality, but India wasn’t going to play it safe so she danced her butt off and gave us one amazing slide down the entire catwalk. In the end, Yvie was the winner, meaning that the $10,000 India didn’t win rolls over to the next week!

9:27 p.m. – In addition, Yvie’s win meant that the jury’s selection would be the eliminated queen. Yvie revealed the lipstick of Derrick, meaning that it was she that was the first to sashay away this season.

NEXT WEEK: The jury opens up about who they voted to eliminate and the queens prepare original lyrics and vocals to contribute to a song. 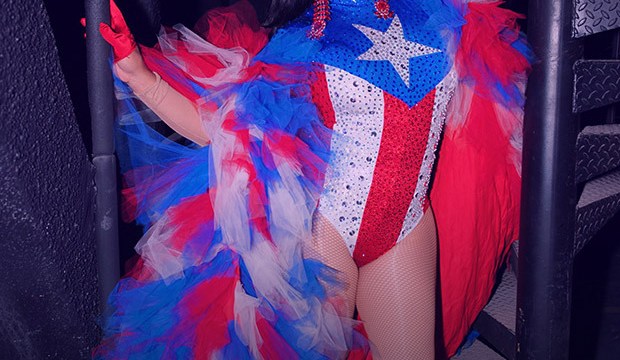