“RuPaul’s Drag Race” continued the 5th installment of its “All Stars” spin off on June 19 with the queens working in small groups to promote boutique hotel experiences. In that third episode, Jujubee was declared the overall winner of the week despite Blair St. Clair and Mayhem Miller creating the judges’ favorite hotel room concept. As the winner, Juju faced off against the week’s lip sync assassin Monet X Change, but lost which meant that the jury of losing queens got to vote to eliminate their consensus choice, Mariah Paris Balenciaga, from the season.

Below, check out our minute-by-minute “RuPaul’s Drag Race” recap of All Stars 5, Episode 4 to find out what happened on Friday, June 26. Then be sure to sound off in the comments section about your favorite queens on VH1’s reality TV show, who annoys you the most, and who you think will ultimately join the “RuPaul’s Drag Race” winners list.

8:02 p.m. – After Mariah’s elimination Shea was relieved that she remained in the competition, but shocked to find out that both Mayhem and Alexis Mateo voted to eliminate her. Privately, Mayhem thought that the group was going to take the opportunity to get Shea out of the way, but to Shea’s face she explained that she couldn’t vote her “sister” Mariah out. Alexis used the same excuse, but the rest of the group saw through it I think.

8:07 p.m. – The next morning Ru presented this week’s maxi challenge: performances in the spoof gossip show “SheMZ.” In the challenge the queens would work in improv teams to act out scandalous scenes in order to make the judges laugh. India and Mayhem were paired as a shoplifter and shopgirl. Juju, Blair and Miz Cracker were in a trio as an overprotected drag mother, drag daughter and a shady queen at the center of a college admissions scandal. Shea and Alexis were paired as two queens fired from a trashy reality show for being too trashy.

8:14 p.m. – During preparation, India and Mayhem kii’d over the fact that India got cast as a shoplifter when she had actually been a shoplifter when she started out in drag. They definitely had the right energy on their team to work together really well. Given the awkwardness between Alexis and Shea earlier in the ep, the energy was a little different during their prep session though both were putting on good humor. In a way they were cast perfectly as queens with a vendetta against each other, but it also put them in a position to throw some decent shade and fakeness at one another.

8:18 p.m. – On the third team, Cracker was still in her head about insecurities with how she’s perceived by the other girls. So she confronted Blair about a rumor Alexis started that Blair and Mayhem were talking about strategies to get Cracker out of the competition. Blair acknowledged that maybe the two of them have had some tension, but she took her space without actively trying to get her out of the game. Cracker wasn’t necessarily buying it though.

8:24 p.m. – In the “SheMZ” spoof, Carson Kressley was on hand to film a scene with all the queens in their best male drag  as SheMZ reporters rehashing some of the footage they’d caught on tape. Ross Mathews also played a role as a cameraman on some of the sets. The first set we saw was between Alexis and Shea and surprisingly their chemistry worked pretty well! They were able to include both physical and verbal comedy in their scene and never had awkward silences that sometimes happen in improv challenges.

8:29 p.m. – Next was the trio in the college admissions scandal scene and though Cracker opened up that scene, once Juju came in to the scene she ate up all the energy and Cracker completely faded into the background. Blair was kind of in her own world as a social media influencer character and didn’t have much to offer either. Toward the end of their skit, Cracker had picked up steam in her dialogue, but it wasn’t quite landing.

8:33 p.m. – In Mayhem and India’s scenes they actually bounced off of each other really well and gave one another equal amount of time to shine. The funniest moment of any of the skits was when they randomly brought out a donut and created this whole gag of their characters being “lickers” where they compulsively lick things. And then later when vases dropped from between India’s legs, broke and then she got on the ground and licked them!

8:42 p.m. – On elimination day as the queens got ready for the “Camo Couture” runway, Shea and Alexis might have started to actually get along with each other after having fun on set, but Shea vowed to keep one eye open when it comes to Alexis. Later, Blair and Mayhem opened up about how they both had DUIs in their past and in Mayhem’s story she talked about how in one of her arrests she was forced to strip out of drag in front of everyone and the police officers which was a humiliating moment for her that horrified all the other girls. Experiences like that show the vulnerability of drag queens and other gender non-conforming people who can be taken advantage of by authority figures.

8:53 p.m. – This week actress Sarah Hyland was the guest judge along with Michelle Visage, Ru and Carson. Juju opened the runway in a slick camo mini with a cape, Cracker followed with a pop star inspired look and then Blair came out in a creative interpretation of, like, a tree? It was funny! Shea was next in blue camo that had a mid-century vibe to it, Alexis was in an all white snow queen look, Mayhem went for baby pink and green to create a Barbie-ish camo look, and India closed in a camo kimono and latex pants with a slick wig.

9:01 p.m. – Based on their performances and runway, Shea and Blair were both declared safe, leaving the other five to be critiqued. Michelle opened by telling Juju that she had so many great moments in the SheMZ scenes and Carson pointed out that her timing was great. Cracker got high marks for her performance, with Sarah telling her that she was the lead of their scene and stole it (that wasn’t my opinion! LOL!) and they also really loved her runway look. On the flip side, while the judges liked the look Alexis delivered for the runway they thought she was overbearing in the acting performance. Mayhem was told that her performance fizzled from start to finish and her runway look didn’t have much concept. At that point Mayhem started serving some attitude back to the judges, clearly upset at her critiques. Sarah loved India’s runway look and especially her makeup, but the judges thought that her performance was one note.

9:06 p.m. – With the critiques out of the way, Cracker was named the top all star of the week, making her safe and giving her the opportunity to potentially send someone home. Both Juju and Alexis were declared safe, which left Mayhem and India in the bottom as the queens vulnerable to Cracker’s whim or the jury vote.

9:12 p.m. – Back in the workroom, Shea and Blair were shocked to find out that Mayhem and India were in the bottom because they actually thought they’d be the top queens. Cracker took some time to speak with both of them to see where their heads were at going into the elimination. Mayhem was in a crappy position knowing that Cracker could hold bad blood based their lack of love for each other, but Cracker said personal issues would have nothing to do with her decision. India plead her case as a strong performer and wasn’t shy about throwing Mayhem under the bus and blaming their loss on her.

9:17 p.m. – While voting, we got to see Shea vote for Mayhem, declaring that “it would be rude” to not return the favor after Mayhem tried voting Shea out last week. When Mayhem voted she basically insinuated that she might have voted for herself over voting for India to go home?

9:21 p.m. – In order to determine who would go home, Cracker had to lip sync against this week’s assassin… Morgan McMichaels! She and Cracker hashed it out in a duel to Rihanna‘s “Where Have You Been.” Cracker started off really slow as Morgan came out of the gate with high energy, but eventually Cracker picked up steam and showed off some tricks. That all wasn’t enough to stop the powerhouse that is Morgan, who used her cape and acrobatics to her advantage. But, somehow, Ru considered it a tie and declared them both winners! With the tie that meant that if the two lipsticks revealed different names then both Mayhem and India could go home at the same time. Morgan revealed the jury lipstick… Mayhem. Cracker revealed her lipstick… Mayhem. So that was that and only Mayhem went home. 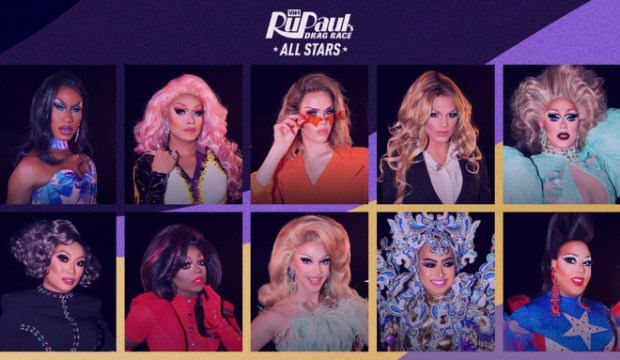