When RuPaul Charles dished out the “double shantay” to Heidi N Closet and Jackie Cox in last week’s “RuPaul’s Drag Race,” it meant that there would be no more second chances for any of the final six in their race to become America’s next drag superstar. The moment was the culmination of Heidi’s third and Jackie’s second time lip synching for their lives, while Jaida Essence Hall had won her third maxi challenge overall without ever appearing in the bottom.

Were Heidi and Jackie able to redeem themselves when Ru challenged them to create and perform a 5-minute “one-queen show” for a live audience? Or did Jaida, Gigi Goode, Crystal Methyd and Sherry Pie remain the frontrunners and each avoid the LSFYL for another week?

Below, check out our minute-by-minute “RuPaul’s Drag Race” recap of Season 12, Episode 11 to find out what happened in “One-Queen Show.” After reading our thoughts on the episode, be sure to sound off in the comments section about the May 1st episode and who you think will ultimately join the “RuPaul’s Drag Race” winners list.

8:01 p.m. – Following the double shantay, both Jackie and Heidi were feeling rather positive all things considered. Jaida was also riding the high of her third challenge win, joining Gigi who was looking at missing a top half placement for herself in the third straight week. For her, this week would be a wake up call opportunity for her to raise her game back to the heights it was at in the beginning. In trying to give herself a pep talk she stuck her foot in her mouth by expressing disappointment that the six remained the six and she wasn’t a step closer to the finale.

8:04 p.m. – Before preparing for their one-queen show, Ru entered the workroom the next morning to present the puppet mini challenge where each queen would design and then perform a mini bitch fest with a puppet representation of another queen in the competition. In the challenge, Crystal took some good digs at Jaida, clocking the earrings she’d already worn multiple times in the competition and recalling her now iconic political debate “look over there!” moment. But Jackie was leader of the pack and declared the winner for her impersonation of Sherry, digging deep into her self-indulgant brand and penchant for old lady characters.

8:10 p.m. – As the winner of the mini challenge, Jackie had the job of designating in which order the queens would perform in this week’s maxi challenge, a one-queen show where the girls would take ownership of the stage for a comedic 5-minute long one-queen show in front of the audience. In the process of selecting the order, Jackie gave herself the opening spot and then had to make the tough decision of giving Jaida the unwanted closing spot.

8:17 p.m. – In their rehearsals for the show, the queens got to present their ideas in front of both Ru and guest judge Whoopi Goldberg. In that process, Jackie bombed with her draft stand-up routine. Ru explained to her that her jokes lacked humanity because they weren’t presenting anything about who she is as a person. It created another emotional moment for Jackie in thinking about her struggle to be accepted by her mother. Gigi also got emotional once it was clear that her struggle with improvisation was something that was getting in her way of creating a workable routine in front of Ru and Whoopi. Later, Whoopi had to give Heidi some acting tips on how to perform like a realistic drunk person and Sherry had to be instructed to restructure her concept so that she didn’t spend so much time acting like a goldfish.

8:30 p.m. – The next day as the queens got ready for their show, Jackie revealed that she had totally reworked her routine into doing impersonations of her mother and father. The idea was a risk for her who still hadn’t told her mom that she is a drag queen. Gigi was also nervous because of how she stumbled through the rehearsal, but the rest of the queens seemed confident about their own prospects.

8:37 p.m. – In Jackie’s “Between Two Parents,” she managed to bridge together comedy and sentiment with her excellent impersonations of her parents. She took the advice of Ru and Whoopi and really ran with it, creating the perfect one queen show to reel the audience in and create something compelling to listen to. She was followed by Crystal’s great “Phenomenal Phil, Exotic Dance Instructor” routine where Crystal was a male exotic dance instructor in a tatted up muscle suit and on-brand 80s styling. In the routine she instructed the audience on some of the most ridiculous dance moves you’ve ever seen, each one sending Ru and the rest of the judges into fits of laughter. Heidi was up next with “Cook Out with Your Cheeks Out,” a short skit that introduced her family members through impersonations. Unfortunately, when compared to Jackie, Heidi’s impersonations grew flat once it was clear that there wasn’t enough variation between them. By the end of the routine it seemed to be wearing thin on the audience.

8:51 p.m. – Gigi followed with “Welcome Aboard Brimstone Airways,” a skit where Gigi was a flight attendant on the airplane to Hell. Though it was stiff in parts, Gigi’s jokes still hit well enough to elicit laughs from the judges. The hiccups in her overly rehearsed skit didn’t stop the high concept from being a hit. Sherry’s “Bubbles and Sherry” routine was an odd “magic” act involving herself and a goldfish named Bubbles, but after 6 minutes Bubbles still hadn’t made an appearance. And then it took a full 17 minutes for Sherry to end her routine that was only supposed to be 5 minutes long. For some reason the judges allowed the act to extend for more than three times the allotted time, upsetting Jaida who was next to close the show. So when Jaida took the stage for “The Pee in Pageant” she was thrown off and stumbled through her telling of a story where she peed her pants as the judge in a pageant. Overall, the laughs were few and far between in a story that involved Jaida peeing on her boyfriend. Should have been a slam dunk, right? Yikes.

9:09 p.m. – In their evaluations, the judges applauded Jackie for managing to do both comedy and sentiment really well and they also loved her cartoonish purple people eater look for the “Color Purple” runway. The judges also really loved Crystal’s “stupid” performance as the dance instructor and absolutely adored her runway look as a purple cow made out of rags and some new makeup ideas for her face. Ross Mathews liked Heidi’s concept for her show, but had to explain that she put too many characters in it and none of them were easily identifiable. Once again the judges liked Gigi’s runway presentation, though it was the same simple silhouette she always brings, and Michelle Visage pointed out that she seemed too nervous in her skit. Sherry’s Cheshire Cat inspired runway look was creative and beautiful and while the concept and delivery of her one-queen show was perfect, she got dinged for selfishly going over the time by 12 minutes. With four of the other girls getting positive critiques, that left Jaida as the obvious choice for the other queen in the bottom, despite the judges saying she had one of the most beautiful runway looks on the stage.

9:23 p.m. – Ultimately Crystal was declared this week’s winner, her first in the competition! That left Sherry, Gigi and Jackie all safe for the week and Heidi and Jaida as the bottom two to lip synch for their lives. In their LSFYL to Prince‘s “1999,” both queens brought their A game with solid dance moves and by owning the stage completely. Jaida created moments for herself with a wig reveal, splits and slides across the stage while Heidi may have succumb to being in the bottom for the fourth time and having few new moves to show the judges. By this time, the writing was on the wall and Heidi’s chances had finally run out. Sadly, Ru had to ask her to “shantay away” while Jaida received her first “shantay you stay.” Don’t worry, Heidi has Miss Congeniality in the bag, right?! Right.

NEXT TIME: It’s another dancing challenge and the final five have no clue who the frontrunners are to make it into the final four to compete in the finale. 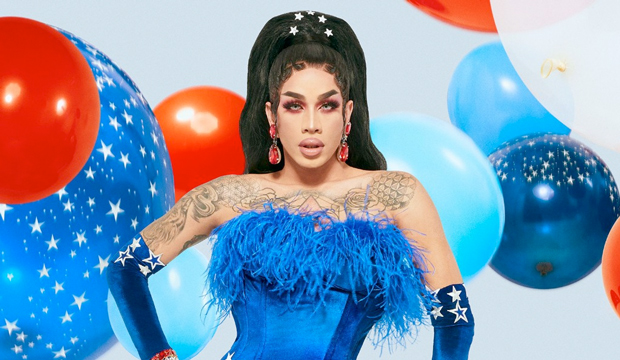