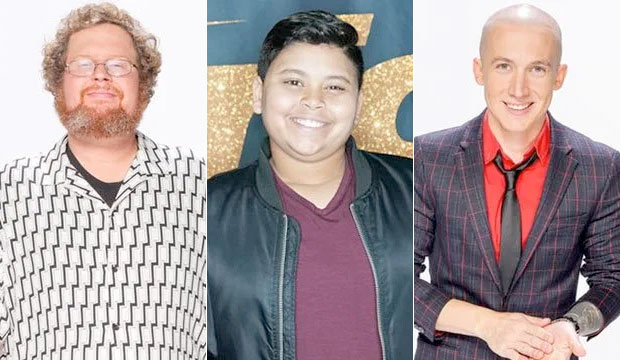 After the “America’s Got Talent: The Champions” superfans voted to send Marcelito Pomoy and Marc Spelmann through to the semi-finals during Monday’s second episode, that left the judges with the final decision of the night. Simon Cowell, Howie Mandel, Heidi Klum and Alesha Dixon had the option of saving either stand-up comedian Ryan Niemiller, Broadway singer Luke Islam or escape artist Spencer Horsman, with their unanimous choice being … Ryan! Did the “AGT” judges make the right pick? Vote in our poll below.

Ryan’s life has changed dramatically since he came in third place on “America’s Got Talent” Season 14. He joined winner Kodi Lee‘s Las Vegas show and, more importantly, no longer has to “drive five hours” to his next comedy gig. Even though Heidi is notoriously “harsh on comics,” he won her over on Monday night with his act about how he loves toying with people differently about his disability.

Luke was known for belting out show tunes week after week on “AGT” Season 14, where he was a semi-finalist, but he decided to switch things up this time around by taking on Celine Dion‘s “Ashes.” While the judges gave the 12-year-old mostly positive critiques, Simon received boos from the crowd when he declared, “I didn’t like the song. I don’t think it enabled you to showcase that big range of yours.”

Spencer hasn’t been seen on the show since he was a quarter-finalist in “America’s Got Talent” Season 7, but his big return to the “AGT” stage was full of danger as he cut his head open during rehearsals. The good news? His live performance went off without a hitch, as he escaped being handcuffed underwater high up in a glass box just before time ran out. Alesha even felt “sick” watching Spencer’s act because it was so intense.

The superfans voted to send through Marcelito and Marc to the next round, with their third, fourth and fifth choices being Ryan, Luke and Spencer. Host Terry Crews then polled the judges for who they wanted to save: Simon picked Ryan, Alesha picked Ryan and Heidi picked Ryan. Howie likely would have chosen Ryan as well, since he’s always been supportive of stand-up comics. Did they choose the right act?