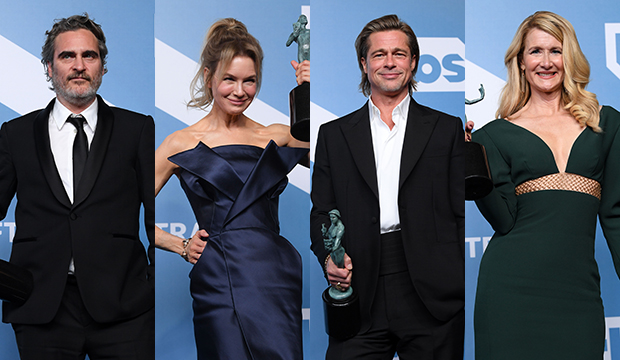 After their wins at last Sunday’s Screen Actors Guild Awards, Joaquin Phoenix (“Joker”), Renee Zellweger (“Judy”), Brad Pitt (“Once Upon a Time in Hollywood”) and Laura Dern (“Marriage Story”) continue to stroll toward Oscar glory. The SAG Awards has one of the best track records with the academy: SAG has only missed five times in Best Actor, seven times in Best Actress, nine times in Best Supporting Actor and eight times in Best Supporting Actress. Not too shabby. But despite so much overlap in the categories individually, SAG and Oscar do not link up 4/4 as often as you might assume.

In its 25-year history, SAG has only had a direct match in all four Oscar acting races seven times, most recently two years ago when the foursome of Gary Oldman (“Darkest Hour”), Frances McDormand (“Three Billboards Outside Ebbing, Missouri”), Sam Rockwell (“Three Billboards Outside Ebbing, Missouri”), Allison Janney (“I, Tonya”) became the first set of acting winners to sweep the four major precursors (Golden Globes, Critics’ Choice, SAG and BAFTA) and the Oscars — something this year’s frontrunners are trying to mimic.

SAG usually aligns 3/4 with Oscar, which has happened 11 times. Last year was one of four times SAG has gone 2/4; Oscar crowned Olivia Colman (“The Favourite”) instead of SAG lead actress champ Glenn Close (“The Wife”), and SAG supporting actress winner Emily Blunt (“A Quiet Place”) was Oscar-snubbed, while Oscar winner Regina King (“If Beale Street Could Talk”) was SAG-snubbed. SAG has three instances of 1/4 and it has never gone 0/4.

Some of these cases were forced splits, whether due to category confusion — like Kate Winslet campaigning and winning in supporting for “The Reader” (2008) all season long before getting nominated and winning in lead at the Oscars — or snubs, like last year’s weirdness with Blunt and King.

The stats suggest that SAG is likely to get one acting race wrong this year, but that’s probably not happening. Like the quartet two years ago, Phoenix, Zellweger, Pitt and Dern look too strong and this season is too short for anyone else to build momentum. That’s not to say the Oscars can’t deliver a Colman-esque surprise, but she and Close had split precursors, while this year’s slate looks locked for a clean sweep. It’s also important to note that six of these 4/4 matches have occurred since the Oscars moved up a month from March to February 16 years ago and five of them were in the last decade.

SEE The Oscars love the ’90s: The supporting actor field is a bunch of acting champs (and a nominee) from the past