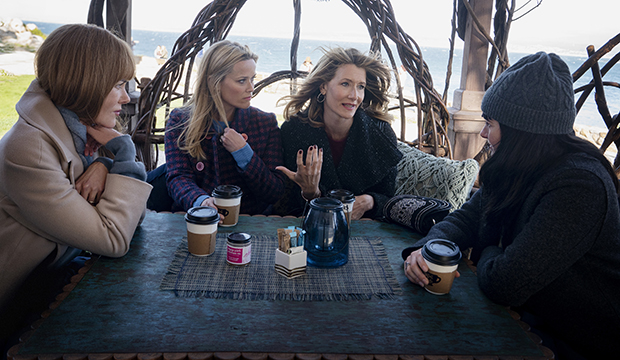 After competing as a limited series for its first season at the Screen Actors Guild Awards, which does not have an ensemble category for limited series and TV movies, “Big Little Lies” can finally get recognized for its entire cast on Sunday. The series in second place in our drama ensemble odds behind “The Crown,” and ahead of “Game of Thrones,” “Stranger Things” and “The Handmaid’s Tale,” but here’s why I’m predicting it to triumph.

Now, however, voters have the opportunity to acknowledge those actors they didn’t get to in 2018 by rewarding the entire cast with the drama ensemble prize. In fact, it would be the only way to recognize the show this year as it wasn’t able to bag any individual acting noms. While one could argue that this is a strike against it, it’s possible that the women of “Lies,” who all had to compete against one another in drama actress, just split the vote. And although Skarsgard was the main male push in the first season, he only appeared in brief flashbacks in the second, and none of the other male stars have been similarly singled out.

SEE ‘Big Little Lies’ got blanked in the individual SAG Awards categories, but don’t count it out for drama ensemble

With 22 cast members on the ballot, “Lies'” cast is the second largest one nominated, behind “Game of Thrones’” which has 29 actors credited. Plus, it’s an all-star cast filled with Hollywood royalty and a handful of veteran actors, including 18-time SAG nominee and two-time winner Meryl Streep, who joined in the second season as Skarsgard’s mother Mary Louise Wright. Given that the SAG-AFTRA voting body consists of both movie stars and TV personalities, it helps that “Lies’” cast includes actors from both mediums, most of whom have even worked in both.

Some of the actors also have multiple projects in contention at the ceremony: Dern is the heavy front-runner in the film supporting actress race for “Marriage Story;” Kidman snagged supporting actress and ensemble bids for “Bombshell;” and although Witherspoon herself isn’t nominated for Apple TV+’s “The Morning Show,” which she produces and stars in, the series earned nominations for Jennifer Aniston, Steve Carell and Billy Crudup. The added visibility for these actors could end up, collectively, bolstering “Lies’” chances in ensemble, especially as it could give voters the opportunity to reward them all together.

Like the first season, the second one was also filled with rich, dynamic performances. Between Celeste (Kidman) and Mary Louise’s grueling custody battle, Madeline’s (Witherspoon) marital struggles, Bonnie (Zoë Kravitz) navigating her complicated relationship with her mother, Renata (Dern) hitting the ceiling amid her bankruptcy filing, and Jane (Shailene Woodley) struggling with being intimate again, each of the Monterey 5 had juicy material to dive in to and channel. The performances helped carry on the social commentary that quickly became the first season’s benchmark, proving once more that some of the most powerful and provocative stories, particularly about women, are being told on TV. This is a triumphant progression that voters may want to celebrate, as well as further encourage, by casting their votes for “Lies.”