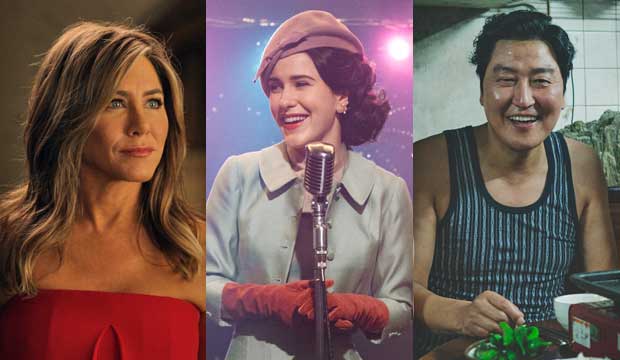 The Screen Actors Guild Awards honored performances in film and television across 15 categories on January 19. But we didn’t see every winner coming. Scroll down to see the five categories that took us by surprise, and check out the complete list of winners here.

There were only six categories for film, and our racetrack odds predicted every single one of them — except the big one. The prize for the best ensemble cast was expected to go to “Once Upon a Time in Hollywood,” but instead it went to the Korean film “Parasite,” which became the first ever foreign-language winner of that category. The writing was on the wall for that upset earlier in the telecast, when the cast received a standing ovation from the SAG audience just for presenting a clip from their film.

The other four upsets were in television categories, and two of those were “The Marvelous Mrs. Maisel”: Tony Shalhoub won for the second year in a row for his individual comedy performance, and the ensemble also repeated in the top category. Cast members Rachel Brosnahan and Alex Borstein were so surprised that they called it a “mistake” in their acceptance speech and explained how they were rooting for “Fleabag.” (Their Amazon sister show did alright too, winning for Phoebe Waller-Bridge‘s performance.)

Meanwhile, after Jennifer Aniston (“The Morning Show“) was upset by Olivia Colman (“The Crown”) at the Golden Globes, Aniston turned around and upset Colman here, taking home her first individual acting honor from the guild (she previously won as a member of the “Friends” ensemble cast).

And “Fosse/Verdon” swept the long form TV categories. We had been expecting Michelle Williams‘s win for playing actress and dancer Gwen Verdon — she had already won Emmy, Golden Globe and Critics’ Choice Awards for her performance before this. But we weren’t anticipating Sam Rockwell‘s matching victory for his role as legendary director Bob Fosse. He had previously lost Emmy and Critics’ Choice Awards to Jharrel Jerome (“When They See Us”) and the Golden Globe to Russell Crowe (“The Loudest Voice”).

Did you see those victories coming when so many of us didn’t? Discuss this and more with your fellow movie and TV fans here in our forums.

Ensemble in a Comedy Series
“The Marvelous Mrs. Maisel” — Ranked 2nd with 39/10 odds