“Jamie’s storyline for me was a huge one,” admits Sam Heughan about the eventful fifth season of Starz’s epic fantasy drama “Outlander.” “Every time we got the scripts and we were working on them, it felt like such big storylines and so much happens!” Watch our exclusive video interview with Heughan above.

The show’s fifth season saw the Fraser clan forging a new life in together in colonial America. While Jamie (Heughan) defiantly protected Fraser’s Ridge against the looming threats lurking in the violent, untamed 18th Century, Claire (Caitriona Balfe) used her modern knowledge and foresight to prevent her reunited family from being torn apart. The season featured delirious highs and devastating lows as we witnessed an array of births, deaths and marriages.

But it as such an eventful season primarily because all four of the show’s main characters dealt with trauma or loss in some way. Brianna (Sophie Skelton) was brutally raped by villain Stephen Bonnet (Ed Speleers). After Roger (Richard Rankin) was captured and wrongfully hanged by thugs, he suffers from suffocating PTSD. Claire was abducted, tortured and raped by the nefarious Brown clan and is left shattered by season’s end. And as for Jamie, not only does he narrowly escape death after a venomous snake bite, he lost his friend and mentor Murtagh (Duncan Lacroix), who is shot in the chest by one of his militia men during the Battle of Alamance.

“I was so concentrated on and consumed by the story line with Murtagh. That whole story line had been so immersive for me,” Heughan recalls about the crushing loss of Jamie’s dearly beloved mentor and godfather. The pivotal scene, which featured midway through the season in the seventh episode (“The Ballad of Roger Mac”) sees Murtagh suddenly shot and killed. As he dies in his godson’s arms, a devastated Jamie refuses to believe his fate and carries him home in the unlikely event that Claire can save him. But it ends up being too late and Murtagh slips away forever.

“I just loved working in all those scenes with Duncan,” Heughan says. “He’s always been this strong and silent companion for Jamie, he’s been his father figure, his guide, his confidante. So for Jamie to lose that, it’s also the last tangible thing has to Scotland, the Highlanders and to this old way of life and now he’s lost that so he really is now in America and this new world. It’s hard for Jamie to lose that.”

Heughan reveals that the character’s death was so important to him and his fellow cast and crew that Murtagh remains a part of the show in his own unique way. “His grave, we have it at Fraser’s Ridge on set,” he shares. In typical fashion for the actor, he generously talks at length about the admiration and respect he has for his co-stars rather than talk about himself. “There’s something about it. It’s beautifully positioned with this amazing tree. It’s a great testament to Duncan and his character. He’ll always be there!” 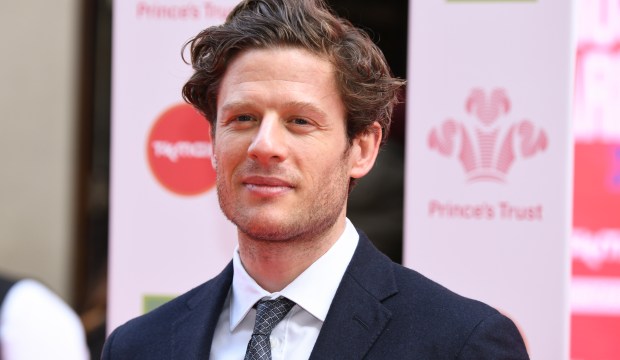