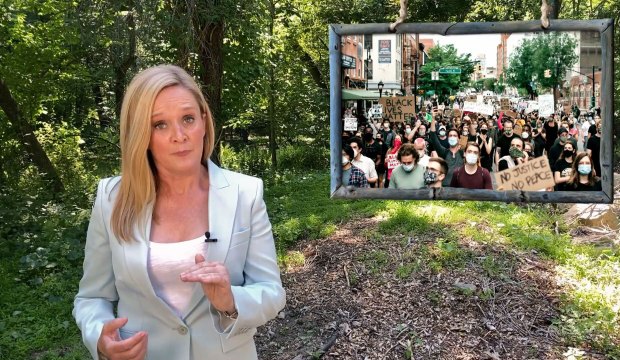 As Brad Pitt once asked about a mysterious receptacle in “Seven,” “What’s in the box?!” That’s what the Emmy nominees for Best Variety Talk Series might have been thinking about the packages they received on Sunday night in their remote locations during the virtual broadcast. For John Oliver, who won for “Last Week Tonight” for the fifth year in a row, it contained an Emmy, naturally. But what about the others? “Full Frontal” host Samantha Bee was determined to get to the bottom of it. Scroll down to watch the video she shared on social media below.

“Oh it’s like a little coffin for alcohol!” said Bee after she pried open the outer case. And when she finally got to the champagne bottle inside the little coffin, her cameraman (and husband) Jason Jones immediately said, “Somebody Google that. How much does that cost?” It didn’t take long to find out that the Emmys gave Bee a $28 bottle of bubbly. “Congratulations on all your hard work!” Jones joked. I’m guessing Emmy producers used most of their budget on the alpaca.

Don’t feel too bad for Bee, though. She didn’t win Best Variety Talk Series this year, but she’s still an Emmy winner. She and her team won Best Variety Special Writing in 2017 for “Full Frontal’s” “Not the White House Correspondents’ Dinner.” And Bee is a perennial nominee, so there’s a good chance she’ll get a couple more chances at Emmys in 2021. But in the meantime, at least the virtual ceremony meant that she didn’t have to wait until the show was over to drown her sorrows. Bottoms up!