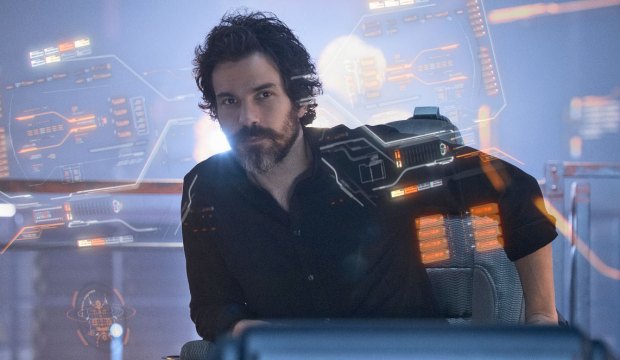 Santiago Cabrera‘s role in “Star Trek: Picard” as Cristóbal Rios is a familiar type. The roguish ne’er-do-well pilot enlisted on a life-saving mission fits the Han Solo mold of the reluctant hero. But he’s one of the highlights of the new series because he has the humor and charisma to earn that comparison. And he steals scenes in three, four, five additional ways as Rios’s many holograms.

“Picard” follows its title character (Patrick Stewart) after he has left Starfleet. He is drawn back into space on an urgent personal crusade to save an android (Isa Briones) being targeted by Romulan spies. He hires Rios and his ship La Sirena to lead his rag-tag rescue crew, and Cabrera brings a welcome irreverence that balances Stewart’s stalwart sincerity — again, much the way Han Solo balanced the earnestness of Luke Skywalker and Obi-Wan Kenobi.

Much of the “Star Trek” TV universe has been known for its earnestness — usually to its credit as it imagined a relatively utopian future for humanity and its front-lines explorers. So less noble types have always stood out, like fan favorites Q (John de Lancie) from “The Next Generation” and Quark (Armin Shimerman) from “Deep Space Nine.” Cabrera’s Rios isn’t as nefarious as those characters, but he nevertheless provides a spark of id on this heroic adventure.

SEEAll 27 classic ‘Star Trek’ episodes that won Emmys: From ‘The Next Generation’ to ‘Enterprise’

And then there are the holograms. Assisting him on his ship are five computer simulations of himself that tackle medical, engineering and other emergencies, and they not only exhibit different personalities, but also different voices, which allows the truly international Cabrera (who is Chilean, but also lived in England and attended an American school in Romania) to adopt Irish, Scottish, and British accents. They’re a hoot, but they also give us insight into Rios himself as they seem to represent aspects of him.

This was especially evident in the March 12 episode “Broken Pieces” in which crewmate Raffi (Michelle Hurd) gathered all the holograms in one place to uncover a secret Rios is keeping. It’s a funny and moving showcase for Cabrera. I hope he flies on for the long haul on “Picard,” but when all is said and done I wouldn’t mind a “Star Trek: Sirena” spinoff down the line.