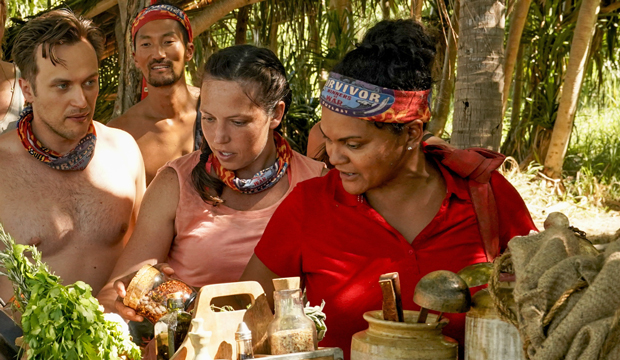 “Survivor” fans are up in arms about Queen Sandra Diaz-Twine sitting out challenge after challenge during Season 40. In the past, host Jeff Probst has always said that castaways cannot sit out back-to-back comps, so what’s the deal? Well, Sandra’s fellow “Winners at War” castaway Sarah Lacina has taken to social media to clarify the long-standing “Survivor” rule: “People keep saying ‘I thought Sandra can’t sit out back to back challenges.’ The rule is you can’t sit out the reward challenge then the immunity challenge. Since we are having immunity/reward challenges, the rule doesn’t apply in this situation.”

SEETyson Apostol (‘Survivor 40’) exit interview: It’s ‘a bummer being voted out,’ but I’m ready to live the ‘aloha lifestyle’

Indeed, this season so far has forgone the normal format of having separate challenges for reward and immunity, instead combining them into one. During Wednesday’s fourth episode, Sandra’s penchant for sitting out comps became a topic of hot conversation. Since Sandra’s Dakal tribe had two extra players, both she and Tony Vlachos volunteered to not participate in the combined reward/immunity challenge.

“Sandra, you didn’t even hesitate raising your hand,” noted Jeff.

The Queen shook her head and replied, “I don’t mind.” After all, she’s sat out almost every other challenge so far in Season 40.

That’s when Parvati Shallow over on the Sele tribe joked, “You gonna rename her bench, Jeff? The Sandra Bench?”

Jeff’s eyes widened when he heard that major diss, but Sandra seemed undeterred. “I like that name,” she declared. “Oh no, she’s not hurting my feelings.”

“She’s proud of it,” Parvati smiled.

Playing along, Jeff then instructed Sandra and Tony to “take a spot on the Sandra Sit-Out Bench.”

After the scene was shown on TV, Sandra posted on Twitter, “Queens Bench. Get it right!” Other “Survivor” superfans noted how the bench should now be called a “Throne” to honor the Queen for utilizing it so much this season.

Sandra announced last week that she’s retiring from “Survivor” after “Winners at War” wraps up. “Here I am for the fifth time, and once this is over I’m retiring from the game. So this season I’m going to switch gears. I want to prove my word to this tribe.” Can she go all the way to win the record-high $2 million check before she leaves forever?

As of this writing, Sandra is the only two-time winner in the history of the reality TV show, claiming victory in “Pearl Islands” (Season 7) and “Heroes vs. Villains” (Season 20). She returned in “Game Changers” (Season 34), where felt the sting of defeat for the first time thanks in part to Sarah voting her out. The show’s producers asked her back to serve as a mentor in “Island of the Idols” (Season 39) alongside Rob Mariano. Months later, both of them returned to compete in “Winners at War” (Season 40).