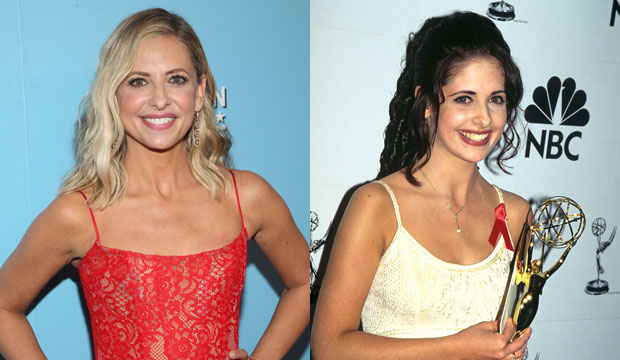 Time flies: actress Sarah Michelle Gellar posted a photo on Instagram in front of ABC Studios to mark the 27th anniversary of her role as Kendall Hart on “All My Children.” Scroll down to see her celebratory post.

SEESusan Lucci on the potential for an ‘All My Children’ revival: ‘We’ll see’

“Gulp … 27 years ago on Feb. 24, 1993, I came to this building, for my first day as Kendall Hart on ‘All My Children,'” she wrote, adding, “Omg those eyebrows — thank goodness they grow back.” Gellar was only 15-years-old when she joined the cast as the scheming Kendall, the long lost daughter of Erica Kane (Susan Lucci) who was conceived when Erica was raped as a teenager.

Gellar spent two years on the show and earned two straight Daytime Emmy nominations for Best Younger Actress in 1994 and 1995. She won the second of those noms, which put her in the winner’s circle four years before her on-screen mom finally broke her infamous losing streak and won an Emmy of her own.

SEESoap fans urge ABC to bring back ‘All My Children’ and ‘One Life to Live’: They never should have been cancelled [POLL RESULTS]

Two years after her “AMC” stint Gellar moved to primetime for her most iconic role: the title demon-hunter in “Buffy the Vampire Slayer.” She played that role for seven seasons, but the Primetime Emmys never gave her the time of day despite acclaim from critics. Perhaps “Buffy” was simply ahead of its time. In subsequent decades shows like “Lost” and “Game of Thrones” made sci-fi and fantasy more palatable to Emmy voters. A vampire show eventually even earned a nomination for Best Drama Series: “True Blood” in 2010.

As for Kendall, that character lived on even after Gellar left the show. In 2001 she character was reintroduced to “AMC” with Alicia Minshew in the role. She stayed on the soap until its cancellation in 2011, earning a couple of Emmy nominations of her own: Best Supporting Actress in 2009, Best Actress in 2011. She didn’t win, but she helped make Kendall the heart of the show, so to speak.

Gulp… 27 years ago on Feb 24 1993, I came to this building, for my first day as Kendall Hart on All My Children. (Omg those eyebrows- thank goodness they grow back)

'Buffy the Vampire Slayer': Top 20 Best Episodes of All Time